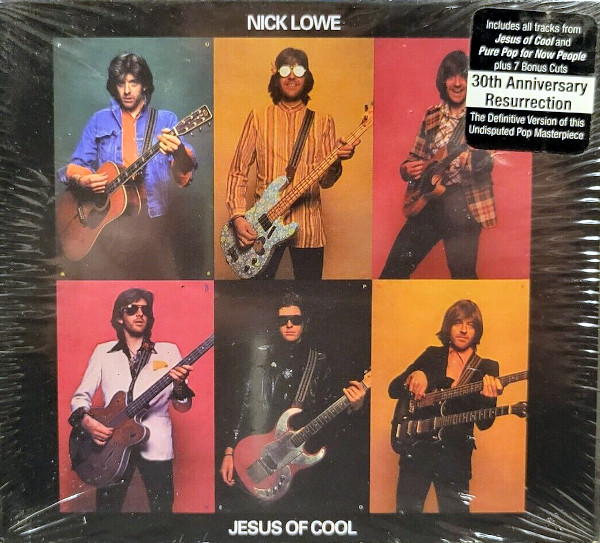 Lowe moves from the behind the boards to behind the mic for a sterling platter of power-pop treats.

The first Nick Lowe album was designed to shock out of the gate (its offensive title had to be scratched for the American release), but the most shocking thing about it is how good it is. Yes, Nick Lowe isn’t above borrowing inspiration where he finds it. Still, he puts a playful twist on traditional rock & roll and has just enough of punk rock’s satirical wit to make it all sound fresh and new. Given his recent production work with Elvis Costello and Graham Parker (and, I suppose, The Damned), it was clear that the teacher had also been a student.

A few of these songs are classics in my book: So It Goes, Tonight, Marie Provost, Nutted By Reality. Unfortunately, “Rollers Show” didn’t make the original cut; an oversight that was wisely correctly for the American release, Pure Pop for Now People. Despite the various costume changes on the front cover and Lowe’s shared passions for pop, punk, country music and rock & roll, Jesus of Cool isn’t as scattershot a record as you might think. Songs like Music for Money and “Tonight” may be world aparts emotionally, but musically they inhabit the same world.

Behind Lowe is a mishmash of Attractions, Rumours, Blockheads and the redoubtable Rockpile contingent. They give the songs some muscle (e.g., No Reason), which Lowe either amplifies or undermines in his production. Thus, a few of the songs feel unfinished or overly experimental (“Breaking Glass,” “Music for Money,” 36 Inches High), while others sparkle (“Tonight,” “So It Goes,” “Marie Provost”). His recent production work (Stick to Me, This Year’s Model), suggests that Lowe was either pushing himself too hard or pushing too many buttons.

Lowe’s next album, Labour of Lust, follows the same format more or less, while subsequent records smoothed out the kinks. It’s the kinks, of course, that make his first two records so interesting. Where else can you hear someone swooning over the Everly Brothers one moment and calling out the music industry as “fakin’ for fucks” the next? The enigma of Nick Lowe is that both emotions are genuine, and that the real Lowe is an amalgam of interests and influences with clever wordplay and catchy choruses at its core.