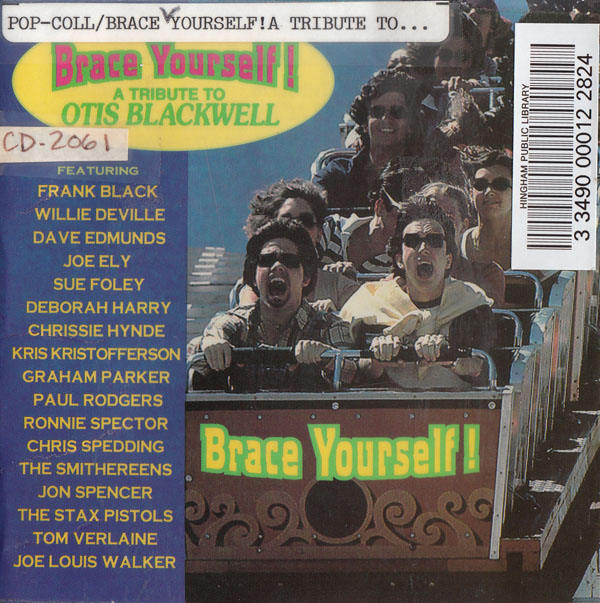 Old wine in new wineskins, the best of Blackwell can still be found on Elvis Presley records.

Life is a roller coaster: one moment you’re up… After Otis Blackwell suffered a stroke in 1991 that left him paralyzed and speechless, musicians, a likable lot by nature, did what they could to lift his spirits: they sang his praises by singing his songs. Brace Yourself might have become another oldies tribute album but for the participation of prickly artists like Graham Parker, Frank Black, Jon Spencer and Tom Verlaine. In between their idiosyncratic performances are faithful readings from Ronnie Spector, Kris Kristofferson and Joe Ely plus some white-hot blues from Paul Rodgers, Joe Louis Walker and Willie Deville.

Now, I’m no student of early rock and roll, so I won’t waste our time fumbling around for a terse eulogy that talks about Blackwell’s influence on music. He wrote some brilliant rock and roll songs that drew heavily from the blues, had the interesting habit of comparing love to an illness (“Paralyzed,” “Breathless,” “Fever,” “All Shook Up”) and, in an era dominated by white rock musicians, made a good living making great music. You might expect this to be a sentimental journey, but the producers quickly discard their rose-colored glasses with Graham Parker’s “Paralyzed” as the leadoff track. Not that it’s so serious as all that. Frank Black’s “Breathless” and Jon Spencer’s “All Shook Up” (comically confused with the Kris Kristofferson version on the CD’s track listing) are perfectly playful.

The trouble with these tracks is hearing them and yet not hearing them because you’ve heard them so many times before. Joe Louis Walker, Tom Verlaine and Willie Deville deliver interesting versions, but most of the time I found myself wishing I were listening to the originals by Elvis Presley and Jerry Lee Lewis. Still, it’s the genius of the songwriter, Blackwell, that consistently emerges. As for nostalgia, well, I did get nostalgic for my old Tom Verlaine records listening to this.