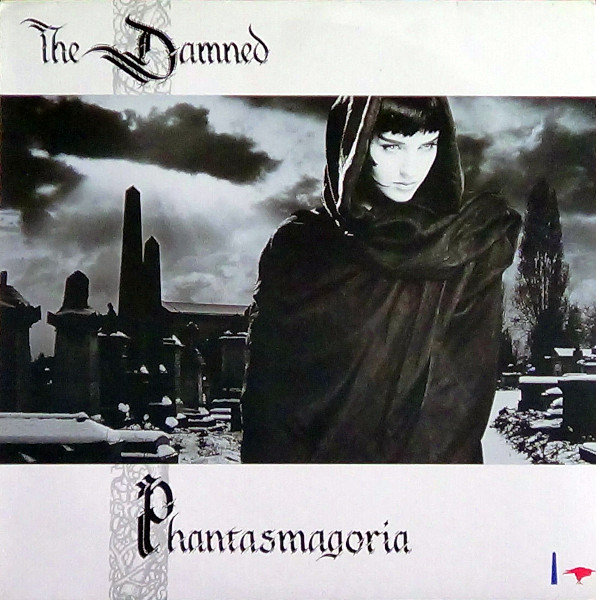 The Damned return from the grave with a new album of gothic new wave music, but where is the Captain?

Order be damned, this is the first Damned album that I bought. Damn, damn, damn. Not that it’s a bad record, but the band’s original punk principles had been abandoned in the interim for a sort of gothic Adam & The Ants sound. Like The Stranglers’ later music, the songs are often very good but the arrangements too studied.

Some listeners really enjoy this record, supposedly those whose love of darkness runs only skin deep, and I can’t begrudge them their mild mucking about in the graveyards of the gentle nobility. But in my personal vision of the underworld, there’s no place for Gary Barnacle’s saxophone, no sanctuary for the nasal psychedelia of “Edward The Bear.” On the other crawling hand that wouldn’t die, “Sanctum Sanctorum” is as cold and creepy as a crypt, and the spaghetti western refugee “Shadow of Love” is done al dente.

While I wouldn’t say a theme is at work on Phantasmagoria, a Poe-tic coupling takes place on “Sanctum Sanctorum” and “Is It A Dream.” Vanian’s vocals are a little precious, like Ian McCulloch, but sung with a rich clarity. (It occurs to me sometimes that musical critics are no more than frustrated, would-be sommeliers.) My favorite track on here is “Grimly Fiendish,” which is pure English pop drawn from the music hall rather than the hall of the dead. Yes, it’s very silly, produced by Bob Sergeant and the band with more than a little Madness in their method.

Ultimately, Phantasmagoria is a very well produced record that fits stylistically somewhere between Echo & The Bunnymen and The Stranglers. It’s a damned better sight than most American new wave bands, but a little more cuddly than an album called Phantasmagoria by a band called The Damned has a right to be.

Photography by Bob Carlos Clarke. Calligraphy by Booce. The model on the cover is Susie Bick, who would marry Nick Cave in 1999.