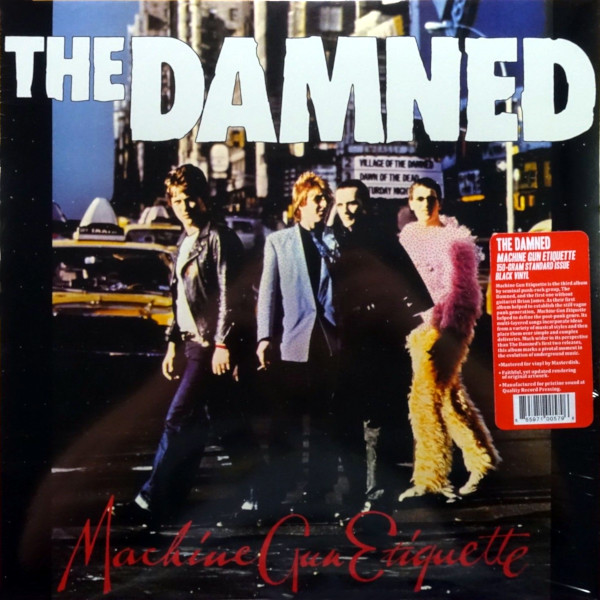 The Damned self-destruct, then regroup without Brian James for this rapid-fire masterpiece.

Kronomyth 3.0: This is why you never Hotchkiss on the first two dates.

Any self-respecting punk band had the moral obligation to self destruct. It was the implicit subtext in The Sex Pistols’ breakup in 1978: punk was a wrench in the pop music machinery that, if left there for too long, might be twisted by the grinding gears of commerce into a more accommodating shape. And so, after two brilliant albums, Brian James and The Damned decided they’d had enough and called it quits. Only, it seems, the rest of The Damned had second thoughts and re-started the band without their founder and main songwriter.

By all rights, what followed should have been a pale imitation. There was nothing in The Damned’s past to suggest that Captain Sensible could competently assume both guitar and keyboard duties or that the remaining members had an albumfull of ideas itching to get out, yet both points are immediately apparent on Machine Gun Etiquette. Calling it the band’s best album would sell their first two classic records short. Still, there’s the sense when listening to this album that The Damned have reached a new plateau of creativity. First of all, Sensible deserves a ton of credit for making the transition from flaky bass guitarist to the band’s musical and melodic heart. Dave Vanian and Rat Scabies continue to outperform the vast majority of their punk colleagues, and Algy Ward (ex-Saints) turns out to be a great free agency sign.

Machine Gut Etiquette was recorded in the same studio at the same time as The Clash’s London Calling (which occasioned the cameo on “Noise, Noise, Noise”), and you have the sense that punk rock was taking a decisive turn at that place and time down a more adventurous path. The Damned include spoken media and, more importantly, moments of genuine melody in their songs, such as “Melody Lee,” “Love Song” and “Smash It Up” (particularly Part I). The album also consummates the connection between Vanian’s ghoulish appearance and gothic music on “These Hands,” “Plan 9 Channel 7” and “I Just Can’t Be Happy Today.” The creepy keyboards will immediately have you thinking of The Stranglers, and from here on the two bands would follow similar arcs.

At the core of the album’s appeal, of course, are three-minute punk songs that buzz with energy and defiance: “Machine Gun Etiquette,” “Liar,” “Anti-Pope” and “Noise, Noise, Noise.” Toss in another MC5 cover (“Looking At You”) and you’ve got an audible connection to the past (punk) and the future (gothic rock) on Machine Gun Etiquette. Rolling Stone named the record #28 on their list of greatest pop-punk records and, while the “pop-punk” label is an oxymoron, the citation does get right both the record’s quality and crossover appeal.

All songs written by Rat Scabies, Captain Sensible, Dave Vanian and Algy Ward unless noted.
* Mrs. Scabies was Jennet Ward, Rat Scabies’ girlfriend. Note that the songwriting credits are inconsistent, depending on region/release.