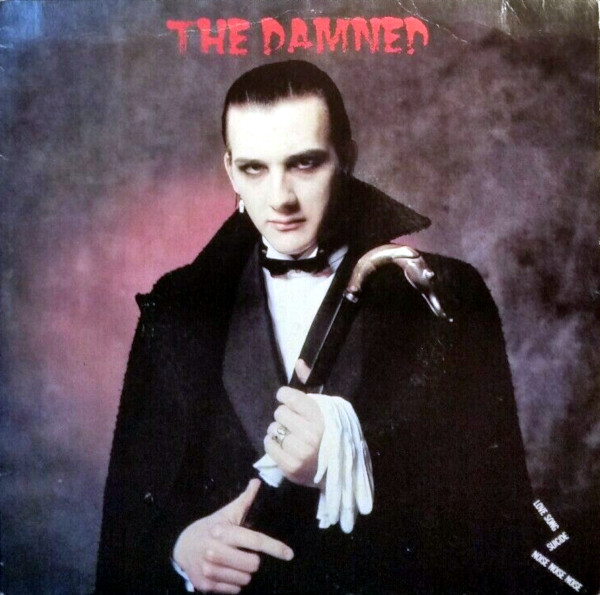 The Damned come back from the dead with a vengeance on this classic punk single, just for you.

Kronomyth 2.5: The way you love me is frightening.

In the Spring of 1979, The Damned released what is likely the best punk love song ever recorded, “Love Song.” It is probably the ass-kickingest, moshpittiest, beer-drinkingest expression of love you’ll ever hear. Meanwhile, in the U.S., Amii Stewart’s version of “Knock on Wood” was on top of the charts. We’d certainly turned into a bunch of pussies since Edgar Allen Poe.

The thing is, The Damned should’ve been dead by now. Brian James, their main songwriter, had left the band, and the whole thing was considered dissolved. But Sensible, Scabies and Vanian decided to re-form, with Captain Sensible assuming guitar duties and ex-Saints Algy Ward joining the group on bass. Not only did the new band not miss a beat, they beat it even harder, faster and louder than before. Produced by Ed Hollis, the songs on the new group’s first single rumbled with an uncontainable force like a landslide. You couldn’t get out of its way; you could only brace yourself for the impact.

“Love Song” starts with Ward’s impossibly loud bass and never looks back. “Noise Noise Noise” is a nice little punk anthem that captures a lovely day in the life of a thug. The maniacal laugh after the line “the sound torments me” is classic Vanian. The last song, “Suicide,” sounds like an amped-up version of The Stooges. All three songs are absolutely brilliant, and collectively represent one of the greatest punk singles ever released. If there was any doubt that The Damned could survive the loss of Brian James, this single made plain that the band couldn’t be killed.

When it came time to release their next album, “Love Song” and “Noise Noise Noise” were re-recorded and given a shinier spit and polish by Roger Armstrong and the band. These versions lack some of the original’s raw energy but are still highlights from their masterful third album, Machine Gun Etiquette. When the single was first released, it was done with a bit of clever promotion: four variations of the picture sleeve were released in the UK, each featuring a different member of the band. Red vinyl pressings were also made available. When the single was re-issued in 1982, only three sleeve variations were printed (Ward being no longer a member of the band) and blue vinyl pressings replaced the red.