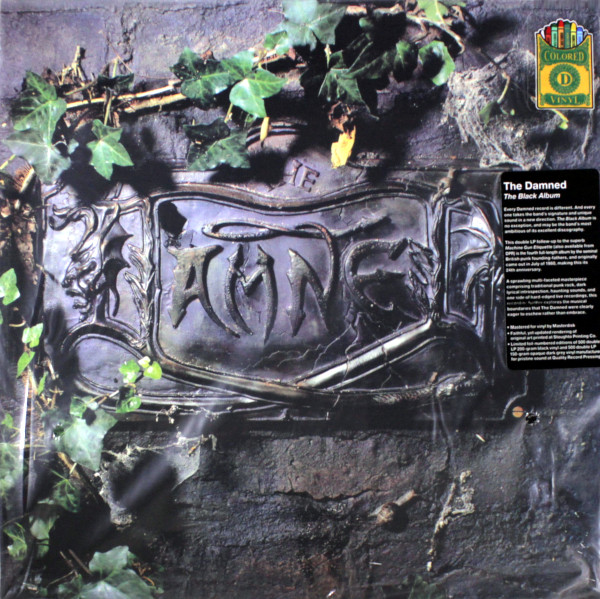 With their gothic tendencies brought to the fore, The Damned find themselves at an inverted crossroads between English punk and Edgar Allan Poe.

Kronomyth 4.0: Let’s wait for the sellout.

In the short time since The Damned arrived, English punk had shifted noticeably toward the gothic and psychedelic: Siouxsie and the Banshees, Echo and the Bunnymen, The Cure, etc. It was apparently all the push the band needed to throw their own black hat into the ring.

The Black Album is, in many ways, the first Damned album that truly reflects the personalities of its players. Dave Vanian, who always looked odd as a goth fronting a punk band, now looks right at haunted home behind the mic for “Wait For The Blackout,” “Dr. Jekyll & Mr. Hyde,” “Twisted Nerve” and “13th Floor Vendetta.” Captain Sensible, meanwhile, continues his musictasting odyssey with Beach Boys harmonies (“Silly Kids Games”), synthesizers (“Lively Arts”) and the failed ambitions of “History of the World Part I.”

Apparently, thankfully, no one told Rat Scabies he wasn’t in a punk band anymore, and he delivers the goods on “Drinking About My Baby,” “Hit Or Miss” and “Sick of This And That.” The new guy, Paul Gray (ex-Eddie and the Hot Rods), plays it fast and loud and never loses his head, even during seven minutes of “Therapy.” Those eleven tracks constitute the first half of The Black Album, which was released as a double album in the UK. The second album bears all the hallmarks of a contract killer: one side of screwing around, cheekily titled “Curtain Call,” and six live tracks. I haven’t heard the live material, but I’m probably not alone; I’ll wager half the people who bought The Black Album threw out the second record in disgust after sitting through seventeen minutes of the worst music ever to bear The Damned’s name.

After the first three Damned records, I had high expectations for The Black Album. I knew how the story ended, that the group traded in its teeth for plastic fangs, but I had hoped for one more classic punk rock record from the band. Instead, The Black Album marks the midway point between punk and gothic new wave. “Wait For The Blackout” is a great anthem, “Drinking About My Baby” is a classic and “13th Floor Vendetta” is as good as you’d expect a song about Dr. Phibes to be. But punks may want to think twice before buying the next Damned album. The same thing happened to The Stranglers. No more heroes anymore, indeed.

Paul Gray (bass), Rat Scabies (drums, vocals, guitar on A4), Captain Sensible (guitars, vocals, keyboards and solo vocals on A3), David Vanian (vocals) with Hans Zimmer (synthesizers on B3). Produced by the Kings of Reverb (The Damned) except B3 by Hans Zimmer.

Artwork and design by Dave Vanian. Photography by A. Gallard.