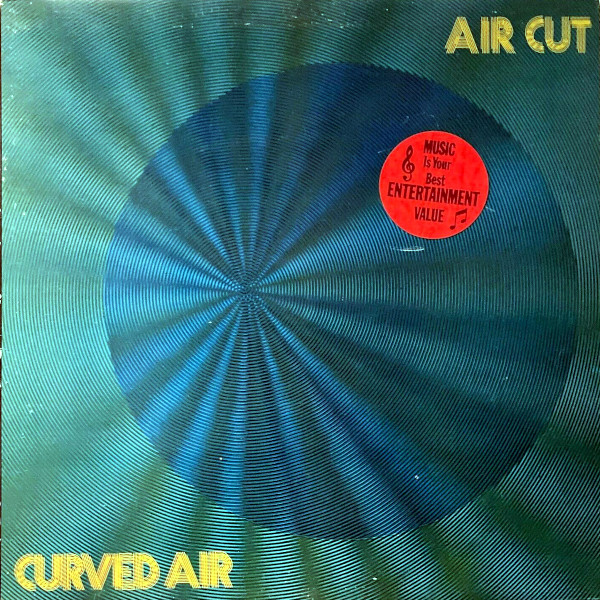 The original Curved Air dissolved after three albums, leaving Sonja Kristina and the band’s current bass player, Mike Wedgwood, to create a new Curved Air out of more or less thin air. Eddie Jobson had been introduced to the band before their breakup and was rightly deemed a suitable replacement for the violin and keyboard roles despite being only seventeen. Graham Gregory, who was then going by the name of Kirby, was brought in as a full-time lead guitarist and Jim Russell replaced Florian Pilkington-Miksa on drums. The new group recorded a new album, Air Cut, that obviously sounded different than previous albums but still fit comfortably into the progressive rock camp of Genesis and Camel.

I personally enjoy this album a lot. I’ll concede that Metamorphosis, which sounds most like the ambitious numbers of their past, is my favorite track on the album. But I also get a kick out of hearing the band rip it up on The Purple Speed Queen, which gives Deep Purple’s hard-rocking openers (“Speed King,” “Highway Star”) a run for their money. The precious and proggy folk of Elfin Boy is a very different sort of song. The breathtaking “Metamorphosis” is not only the album’s standout track but also a signpost that change will be the only constant; a point that Wedgwood’s breezy World confirms.

Side two opens with a proggy instrumental, Armin, that showcases Jobson’s violin. It’s no wonder that many have made Jobson’s debut the focal point of the album, although I would argue that Kirby’s electric guitar is just as important to the group’s new sound, as it adds something that wasn’t there before. His U.H.F. might even be the band’s most succinct rock song since “Back Street Luv,” at least for the first two minutes. Wedgwood takes the lead vocals on Two-Three-Two, which gives it a very different feel than the surrounding material, sounding more like Uriah Heep track than Curved Air. The closing Easy ends the album on a dramatic note, although the arrangement never gels for me.

Sonja Kristina herself has cited this as one of her favorite Curved Air albums, and I wouldn’t argue with the lady. Given how much the lineup had changed, their ability to cobble together something coherent that stayed within the general vision of the original group is pretty amazing. As for the observation that the music rocks harder than past Curved Air albums, the same could be said for Gentle Giant’s albums, and no one was complaining about them. Interestingly, Renaissance (whose manager was Miles Copeland) went through a similar change in the beginning—and both bands rightly reckoned that their leading ladies were the lightning rods for inspiration.

Design by Modula. Illustration based on an original drawing by Ian Fink. Photographs by Mal Linwood-Ross and Mike Putland.