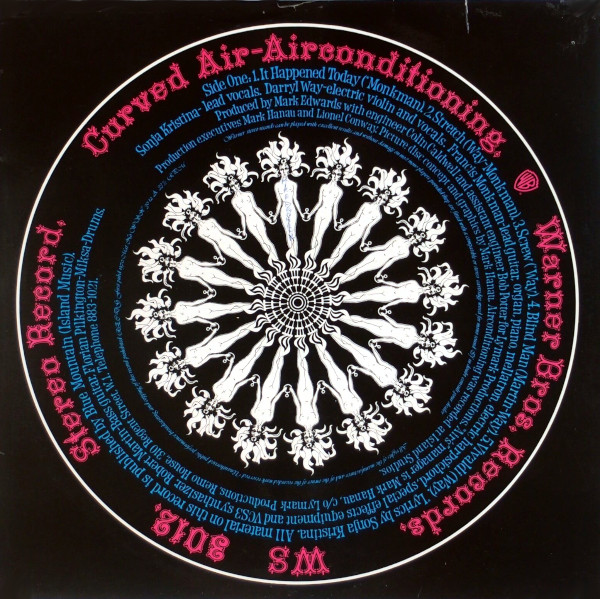 Kronomyth 1.0: In the court of the crimson queen.

At the fringe of the Woods of the Seven Trees, peer animals not to be believed: velvet moles and gentle giants and wander-giraffes of static science. Venture in a little deeper and you’ll discover another creature, one of air and strings and sound, tempter and tempest, queenly crowned, a spirit of air that curves between trees and blows through the brain like a crooked breeze.

I have, it seems, lived an arid life until now, content to walk along the fringes and mistake it for a proper venture. (See what a fool I’ve been, I haven’t lived my dream!) If you enjoy the music of Gentle Giant and Van Der Graaf Generator and have yet to make the acquaintance of Curved Air, lungfulls of Air Conditioning are in order. There are, sadly, just a handful of such treasures for the hearty traveller to discover beyond the known wonders (Yes, ELP, Genesis, Jethro Tull, Rush, etc.). Gentle Giant and VDGG are among those first unexpected encounters, and more than a few would-be explorers have made camp there and gone no further, certain that they’ve hit upon Solomon’s Mine (and, in a sense, they have). But delve deeper into the woods and you’ll discover smokecurls of strange voices and violins intertwined with pot and Pan.

It would be easy to point to the music of Renaissance and John Cale for a parallel, but Curved Air arrived at the same time, and so you might see this as a broadly sweeping muse who put her benediction upon a multitude at once, from whence strange flowers grew called Cale and Renaissance and Curved Air. In Air Conditioning, you’ll encounter a different sort of siren on the roxyfied “It Happened Today,” a bit of calesthenics on “Stretch,” the sisyphean “Screw,” the weird and wonderful “Blind Man,” the classical colossus “Vivaldi,” and that’s just on side one. The second side includes more of the same: “Hide And Seek,” “Propositions” and “Situations” might all be considered classic Curved Air tunes, with a winsome instrumental (“Rob One”) and classical coda “(Vivaldi With Cannons”) thrown in for good measure. It’s a pity I didn’t turn on Air Conditioning sooner instead of fanning myself with the same old records. A better beginning you couldn’t ask for; now if I could only find what happened to their happy ending…