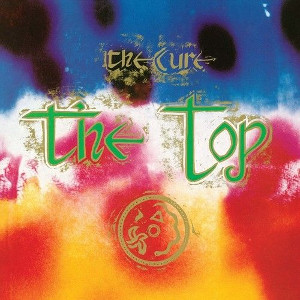 Some people will tell you this is The Cure’s worst album. Apparently, the same people who think Siouxsie and the Banshees suck.

The general consensus among critics is that The Top is the bottom where The Cure are concerned. I’ll confess to being a bit underwhelmed by it in the beginning too. It’s not the cavalcade of hits you’ll find on the albums before (Japanese Whispers) and after (Head On The Door). “The Caterpillar” is the only thing most people remember from The Top these days. But it is arguably the most gorgeously produced record that Robert Smith and Laurence Tolhurst had made so far.

The exotic influence of Siouxsie and the Banshees is keenly felt here, and maybe some (or many) took umbrage with the blurring between the two bands. I would tell you that the album is drenched in psychedelic experimentation, though a failed experiment it isn’t. Instead, Smith and co-producers Chris Parry and Dave Allen have created something entirely new here: punk, psychedelia and new wave with emerging pop sensibilities topped off by Smith’s increasingly bizarre but artful vocals. Listening to a song like “Piggy in The Mirror,” I have the impression that a new kind of singer is emerging; I imagine it must have felt that way when listeners first heard Elvis.

Smith has certainly written better songs that “Shake Dog Shake” and “The Top,” and perhaps bookending the album with two of its weakest tracks was its undoing. You can’t really listen to this album, though, without being impressed with the “new” Cure sound and how much music they’re able to create with only two full-time players plus a drummer. True, you won’t find many hits on here, but that’s what greatest hits records are for. What you will find is an important and, yes, transitional record, that finds the butterfly of the future almost fully emerged.

All songs written by Robert Smith unless noted.