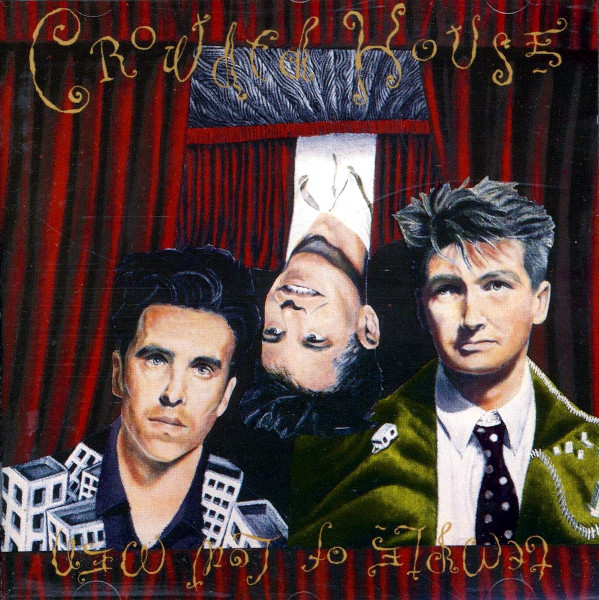 On their second album, the pressure of fame takes the wind out of their sales.

Kronomyth 2.0: A few cards short of a full house.

Whether Neil Finn was feeling the pressure of expectations or the heaviness of his newfound fame, the second Crowded House album is weighed down by something. As a result, the songs on Temple of Low Men reveal a palpable weariness. Nothing on here sweeps you off your feet like “Something So Strong” or “Don’t Dream It’s Over” did. And the high-gloss production from Mitchell Froom, something I have a love/hate relationship with, feels disingenuous when the band’s main creative force is in such a gloomy mood.

The album does contain a few great choruses: Into Temptation, Never Be the Same, Better Be Home Soon. That last song nearly cracked the US Top 40 and stands as the album’s most successful track. Of course, Capitol was probably banking on bigger success after Crowded House became the year’s sleeper. You can’t fault Capitol for not trying, as they released nearly half the songs on Temple of Low Men as singles, but most failed to stick.

Some of the lyrics deal with fame from an unflattering perspective: Sister Madly, Mansion in the Slums. Many are just dark observations: I Feel Possessed, Kill Eyes, In the Lowlands. None of them are a catchy chorus away from making you feel good. And I guess that’s the main difference between the first and second albums: Crowded House made you feel hopeful for the future, Temple of Low Men feels hopeless.

Fortunately, things got better. Tim Finn joined the band and Woodface was everything you’d hoped for and more. There are some who would tell you that “Better Be Home Soon” is worth the price of the album alone. I’m not one of those people but, again, I’m not a huge fan of Mitchell Froom’s production style and constant keyboard tinkering. Plus, I’m sure that there are Michael Penn, Squeeze or Toad the Wet Sprocket albums missing from your collection that will deliver more joy.

All songs composed by Neil Finn.