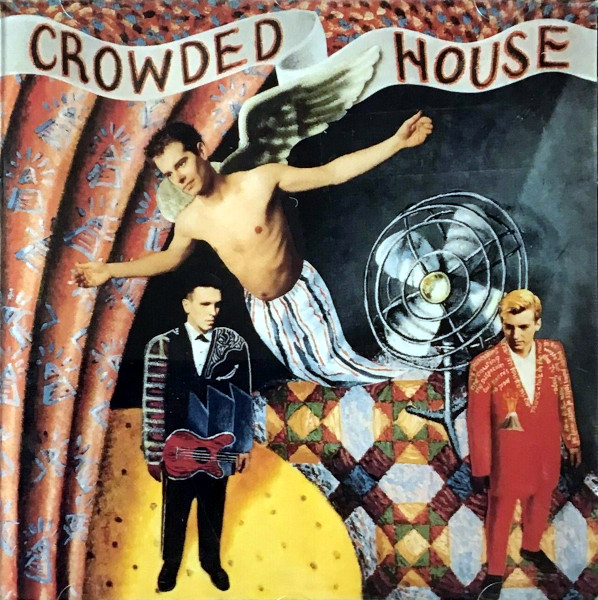 A new album that fits perfectly between Split Enz and Squeeze in your CD collection.

In the end, Split Enz was a house divided. As Tim Finn went off on his own Escapade, Neil Finn shouldered the bulk of the songwriting for the band, which resulted in the pretty decent Conflicting Emotions and the not-so-pretty See Ya Round, after which the Enz dizzolved. Neil slipped out the back door with the rhythm section from the final touring version of the band, and re-appeared in Crowded House.

Crowded House became something of an international sensation when Don’t Dream It’s Over and, later, Something So Strong soared into the US Top 10. The album captures the musical zeitgeist of college rock in the late 80s: tuneful, wistful, mature, with modern production that manages to sound “authentic” through folksy instrument choices like acoustic guitar, organ and jangly percussion. Producer Mitchell Froom is at least partly responsible for this sound, with the caveat that I’ve never much cared for it.

About half the album is very good, which is what you’d expect from a superb songwriter like Neil Finn. The aforementioned hits, World Where You Live, Can’t Carry On and Tombstone deliver on the promise of new songs from the most tuneful Finn. There are a few nods to the earlier Enz, such as the return of the dirty creature on Love You ‘Til the Day I Die, and I Walk Away is actually a holdover from the last Enz album. The rest of the record is fine as filler goes, including a dark tale about a dead aunt (Hole in the River).

The only really problem with Crowded House is that it isn’t crowded enough. Split Enz was a seven-piece band. Crowded House only has the three full-time players, with Froom insinuating himself as a fourth member through frequent keyboard solos. Split Enz records also had a certain kookiness that rarely appears here (or on Tim Finn’s first solo record, for that matter). I had less of an issue with Squeeze sounding like grown-ups, but a grown-up Split Enz just makes me feel old.

I probably should like this album more than I do, but the heavy production is off-putting and both the sentimentality of the past (cf. “The Devil You Know”) and the quirky strangeness (cf. “History Never Repeats,” “Hello Sandy Allen”) are sorely missed. Initially, I thought this record was really good, so you can take my waffling opinion for what it is or chalk it up to a creeping cynicism with age. Fortunately, more of the group’s personality emerged on later albums.

All songs written by Neil Finn unless noted.
*On the cassette versions, track 1 appeared as the fifth track after “Don’t Dream It’s Over.”