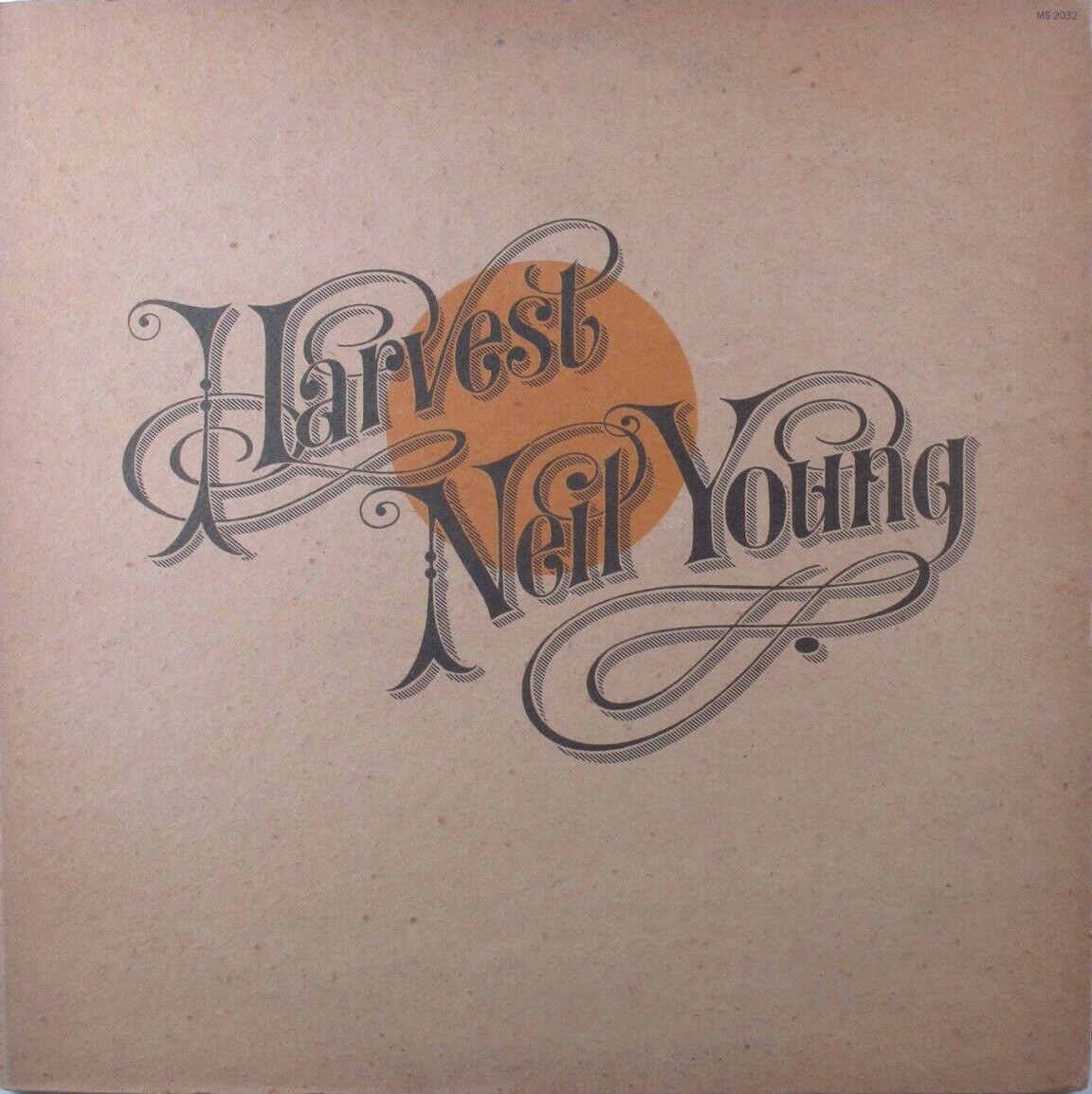 A second goldmine of classic “country” rock songs including “Heart of Gold,” “Old Man” and “Alabama.”

Kronomyth 4.0: Let me fill your cup with the promise of a man.

At the time of its release, After The Gold Rush stood out as a bumper crop of brilliant country-rock songs. Neil Young then ditched his backing band, Crazy Horse, formed a new one (dubbed the Stray Gators) and released an even better album, Harvest. Neil’s fourth solo album topped the UK and US charts, sold millions of copies worldwide and cemented his status as a rock icon. It also closes a trilogy of albums, beginning with Everybody Knows This Is Nowhere, that represents the bulk of what is considered classic Neil Young, from “Cinnamon Girl” to Heart of Gold.

The first thing you notice about Harvest is its dancing in the shadows. Out on the Weekend is a simple song about a lonesome man, the sort of song that should limp along, but in the blending of voice, harmonica, guitars, bass and drums it feels like it wants to skip with joy. That gentle, lilting rhythm is even more pronounced on Harvest. I’ve never figured out what “Harvest” means, but most of the record seems to use dream imagery instead of a concrete narrative. Just when you’re thinking that Neil can do no wrong, he does with A Man Needs a Maid, featuring full-blown orchestration from Jack Nitzsche and the (I kid you not) London Symphony Orchestra. It would be tempting to chalk this up to Neil Young’s dark sense of humor, except that he has a long history of hanging himself with his own rope, from “Broken Arrow” to “The Old Laughing Lady.” All is forgiven with “Heart of Gold,” which returns to the simplicity of the opening song but with a much better melody and message. This might be, if not the best song Young has ever written, then quite possibly his most famous. The first side closes with Are You Ready for the Country?, a song that might be about the Vietnam War and recalls Bob Dylan’s more rollicking, rocking numbers.

Perhaps no song on Harvest uses the sneaky rhythms of its instrumental interplay so well as Old Man. From it sere beginnings, the bitter turns bittersweet and the song runs smooth like country clockwork for three minutes that pass too quickly. Over a long career, this remains my favorite Neil Young song and one of my favorite songs, period. Again, lest the listener grow too comfortable, Jack Nitzsche and the London Symphony Orchestra hijack the next song, There’s a World, and turn it into a high-production musical number. You’ve heard of making a silk purse from a sow’s ear? This is like making Porgy & Bess from pork butt. Alabama combines elements of “Southern Man” and “Ohio” for another electrified shock to the south, though slightly more sympathetic this time. The album’s shortest song is also its most powerful. The Needle and the Damage Done is a song about heroin, a drug that contributed to the deaths of Crazy Horse guitarist Danny Whitten and CSNY/Neil Young roadie Bruce Berry. Young’s ghostly performance gives me chills every time I hear it. Neil Young records tend to end oddly, and Words is no exception. There are some references to the electric guitar blasts of “Down By The River,” but it feels unfinished. The closing trio of songs give the album a dark, heavy vibe at the end; a far cry from “Cripple Creek Ferry.”

After Harvest, Neil Young albums should be consumed with caution. There were certainly some great harvests ahead (e.g., Rust Never Sleeps), but Young became more erratic as an artist and less interested in being a rock star over time. Here again, the parallels to Bob Dylan and Joni Mitchell aren’t completely baseless. Through the years, Harvest and After The Gold Rush have swapped spots in Rolling Stone’s 100 greatest albums of all time and, in fact, the better album is likely whichever one you’re listening to at the time. Young is the same lone ranger on both but with different posses, Harvest marking the end of a great campaign before our hero wandered off into the wilderness.