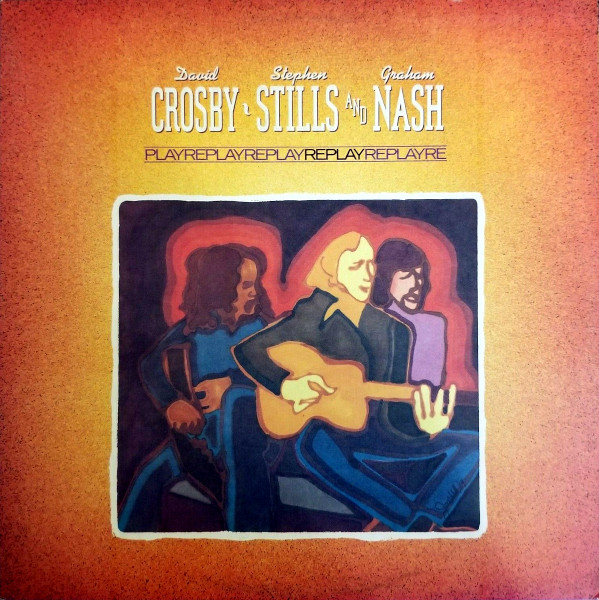 A companion compilation to So Far that brings the CS&N saga up to date.

This was apparently released on the same day that John Lennon was shot and killed. So much for good timing — not that there’s ever a good time to pick peoples’ pockets with product, but at least you can hide the act during Christmas time. The purpose of Replay is to line the pockets of Stephen Stills, Graham Nash and, to a lesser extent, David Crosby (as well as label Atlantic) and generate interest in yet another inevitable CSN reunion. In fact, Nash and Stills had already begun writing new material together, which would appear on Daylight Again.

In its defense, Replay takes pains not to repeat their previous compilation, So Far, instead serving as a companion that brings the story up to date with selections from their solo albums and their last album, CSN. The band even brought Joni Mitchell back for the album artwork. Still, it isn’t a case of sloppy seconds, as there were plenty of good songs left to choose from, including Just a Song Before I Go, Marrakesh Express, Carry On, Love the One You’re With and Shadow Captain. The album also keeps the CS&N vibe intact by choosing solo songs that feature all three members singing harmony, such as First Things First. (Change Partners is also credited to the trio, although Nash didn’t appear on the original song to my knowledge.)

A few of the songs were also remixed, although I can’t recall which ones. “Love the One You’re With” sounds different to me, yet it isn’t mentioned as being remixed, so maybe the organ is just louder than I remember. At any rate, the remixes aren’t unique enough to make it a collectible album. In my opinion. You, on the other hand, might think it the very definition of collectible. You’re definitely guaranteed forty minutes of good music, but it’s their lowest-charting album to date for a reason.