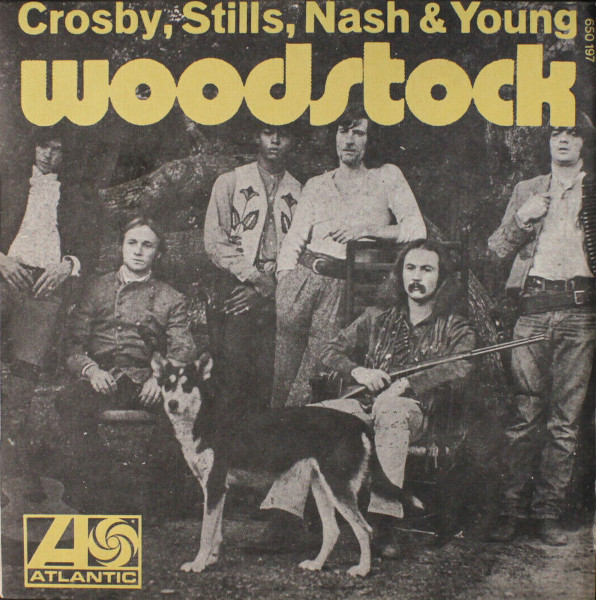 Joni Mitchell crystallized a moment and CSN&Y shine their brilliant light through it.

Time to feed the mythology monster living in the basement of our collective conscious. CSN and if you look real closely Y play Woodstock and the world is forever changed, or so it would seem. Joni Mitchell misses the landmark event, but after talking to the group pens “Woodstock” anyway. In March 1970, the band releases the song and the world is changed again via perspective or historical revisionism or myth-making or whatever you want to call it.

Joni’s sere rendition of her own song appears one month later on Ladies of the Canyon. Somehow, not unwittingly I suppose, CSN&Y become the spokespersons for a generation, in a sense appropriating Woodstock with this tune. Toss in Neil Young’s “Helpless,” and you have a little slice of history all to yourself. Me, I never bought into the Woodstock mystique, but then I’ve never met a mob I liked.

French 7-inch maxi-single version
A1. Woodstock
B1. Tech Your Children
B2. Ohio

Canadian 7-inch single reissue
A1. Woodstock
B1. Teach Your Children