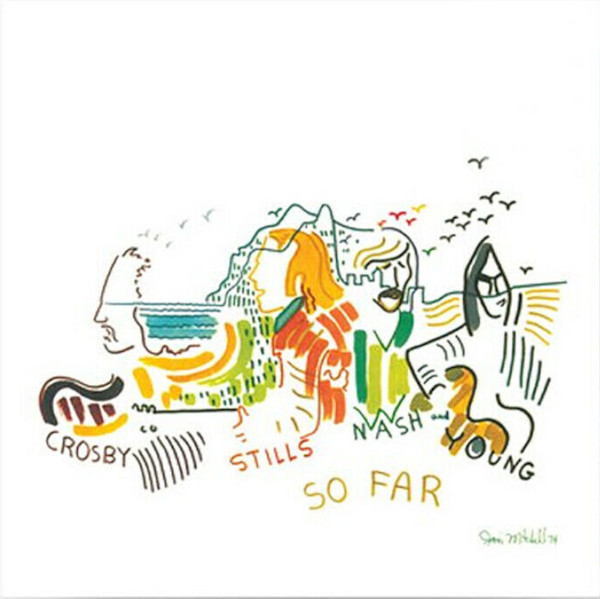 A “greatest hits” album that was released to coincide with (and capitalize on) the quartet’s 1974 world tour.

It’s Deja Vu all over again, and Wooden Ships and Woodstock too. The band was officially over at this point, part of the great crumbling of talent that marked the children of the summer of love (Buffalo Springfield, Cream, Jefferson Airplane). That CSN and sometimes Y would reunite doesn’t change the fact that much of their greatest work (as a collective) was already behind them.

For those going back to the garden via So Far, some of the prettiest flowers to bloom from their generation are here: “Woodstock,” “Déjà Vu,” “Teach Your Children,” “Suite: Judy Blue Eyes.” Listening to those complex harmonies and ambitious lyrics, I’m almost embarrassed to admit that I came here originally for “Our House,” arguably the greatest pop song The Beatles should have written and never did. I really am a simple soul though. As rich as the harmonies of “Helplessly Hoping” are, they’re not my cup of tea. “Ohio” is bracing but too bitter for my tastes.

I imagine that CSN&Y fans are more quickly polarized than fans of The Beatles because the individual talents were more easily separated with CSN&Y. If it seems profane to compare the two, consider this: the music of So Far is drawn from only two albums and one single (“Ohio”). If you can cobble together a better album from any two Beatles albums, let me know.

As introductions go, So Far is far better than most. There are few single album compilations that capture the essential moments of an act as well as this (Jimi Hendrix’ Smash Hits comes to mind). If you buy only one CS&N album, make it this one. And if you don’t own at least one CS&N album, shame on you. Note that the original release (SD 18100) featured a cover with a raised border and brown lettering on back; the subsequent reissue (SD 19119) was produced more cheaply on regular stock with black lettering on back.