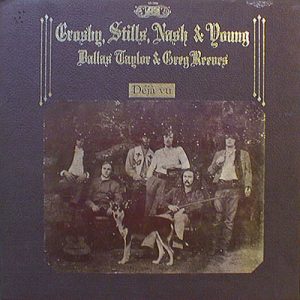 A heavier, earthier, more ragged record than their debut, the cause of which is called Neil Young. His voice adds a not unwelcome sourness to the choirboy harmonies of CS&N’s debut, his cranky guitar work pushes the band squarely into the rock half of the folk-rock movement. And yet Neil Young isn’t the story here, just an interesting chapter in it. Déjà Vu is one interesting chapter after another. The opening “Carry On” aligns with the multi-part “Suite: Judy Blue Eyes” in form, and perfectly sums up the contrast in styles between the two records: the harmonies are lower but no less beguiling, the music more informed by Santana than Simon & Garfunkel. Turn the page and you get the first of Graham Nash’s lovely fables, “Teach Your Children,” featuring the steel guitar of Jerry Garcia. We keep our guard down for “Almost Cut My Hair” only to discover that David Crosby has much more on his mind. It’s really an anthem, marvelous because it questions its own motives for allegiance even as it praises the cause. When Neil Young’s “Helpless” rolls around, we’ve already made the acquaintance of his cantankerous electric, so this disarming country song is met with a raised eyebrow. The real Neil emerges on the opening moments of “Woodstock,” kicking up dust like a bantam rooster, and it’s here that you get an idea of what the first album might have sounded like had he been aboard. The title track weaves its familiar spell, and just as we’re convinced that the album couldn’t get any better, it does. “Our House” is simply one of the prettiest songs ever written, on a par with any of Paul McCartney’s romantic confections (“I Will,” “When I’m Sixty-Four”). To me, it’s the peak of a nearly perfect album. Things unravel slightly at the end, beginning with the Stills solo piece “4 + 20.” The three-part “Country Girl” from Neil Young is very good, but his ambitions have always been a little larger than his skill as an arranger. The closing “Everybody I Love You,” credited to Stills and Young, sounds like a holdover from Buffalo Springfield. As brilliant as it is, Déjà Vu is a balancing act. CSN&Y wasn’t a band so much as an open market where each member could shop their finest wares. Competitive natures may have spurred them on, and they clearly benefited from bartered skills, but we should have seen the planets slowly slipping from alignment. They wouldn’t approach this level of artistry again as a unit, instead splintering off into solo ventures and earlier couplings. But the serendipitous moment was captured for eternity, and Déjà Vu won’t let us forget.