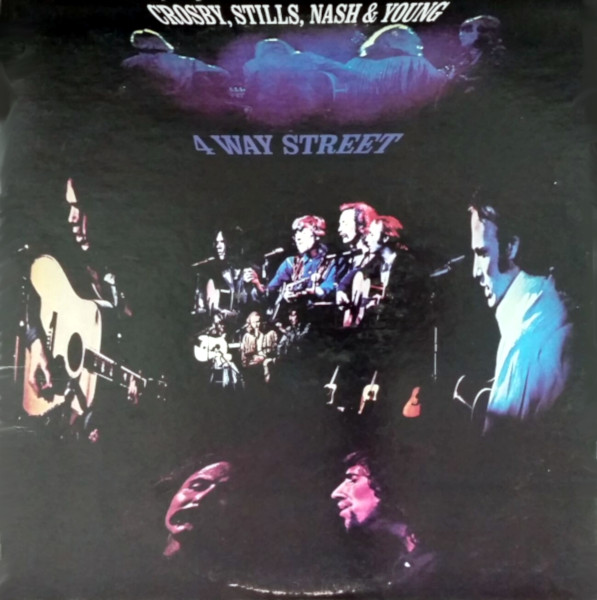 An interesting intersection of group and solo material recorded live in concert.

This is one of the best concert recordings you’ll ever hear, in which Crosby, Nash and Young come out smelling like flowers and Stills comes out smelling like fertilizer. That last point is a shame, since Stephen Stills is far more talented (and, one would presume, less annoying) than 4 Way Street lets on. Credited to Crosby, Stills, Nash and Young, the shows were a mix of solo performances and group performances, divided pretty evenly between the acoustic set (the first side) and the electric set (the second side). It’s an interesting approach that effectively brings the solo material (“Love The One You’re With,” “Chicago,” “Laughing,” “Southern Man,” etc.) into the CSNY fold.

The record begins with a tease: a snippet of “Suite: Judy Blue Eyes” that, if captured in full, would represent Stills’ best performance. (You have to wonder why he didn’t block the release of this album, or at least listen to it before signing off on it.) The solo performances are often arresting and shine a charming light on their authors’ personalities: Nash comes across as gracious, Crosby as spacey and funny, Young displays a dry sense of humor. The remaining trio provides minimal accompaniment while the other is playing; Stills adds some tasteful guitar to the proceedings, Crosby and Nash provide supporting harmonies as needed.

Neil Young’s songs sound as good as you remember; highlights include his introduction to “Don’t Let It Bring You Down” and an epic performance of “Southern Man.” Crosby delivers mesmerizing performances of “Triad” and “The Lee Shore” that stand with some of the best work he’s ever done. Sadly, this is probably the last great recorded performance of David Crosby, as drugs would soon take their toll on his voice and mind. Nash debuts a new song, “Right Between The Eyes,” and does a good job on “Chicago” (the expanded compact disc reissue adds a nice version of “King Midas In Reverse”). As for Stills, it quickly goes downhill after “49 Bye Byes” as he launches into the political patter of “America’s Children,” proving nothing except that the man can’t preach and play piano at the same time.

“I don’t know if I want White America to remember or to forget that Jesus Christ was the first non-violent revolutionary. Dig it, oh, dig it, oh, right on, dig it, yeah.” – Stephen Stills, “America’s Children.”

The electric side is consumed by two 13-minute performances. “Carry On” does for too long. The performances from Crosby (“Long Time Gone”) and Nash (“Pre-Road Downs”) are good, and I’ve never heard a performance of “Ohio” I didn’t enjoy (Stills should have learned a lesson from Young and let his music do the talking). My grousing aside, about eighty percent of 4 Way Street is brilliant (or at least very good) and belongs in any serious shortlist of the best live rock albums from the era. As its name implies, the performances represent an intersection of four individuals who were each going in their own directions musically. You’re invited to stop and listen for a while, since it’s a rare alignment of stars you’re witnessing.

“I hated Four Way Street. I was embarrassed to put my name on that record. I thought it was atrocious.” — Stephen Stills in a 1974 Creem interview.