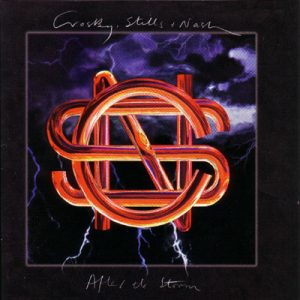 How cool is it that, twenty-five years on, CS&N can still carry on a meaningful musical dialogue with their audience? After all the reunions, alliances and solo ventures, After The Storm still manages to captivate. The three personalities shine through on the opening trio of songs — Stills the bucking bronco, Nash the simple country boy, and Crosby the social commentator — and occasionally afterward. If it sags some in the middle, shouldn’t it after all these years? The harmonies are where the three talents meet, a little tarnished by age but otherwise lovely. On the instrumental side, Stills takes the lead, alternating between acoustic and electric, with Nash and Crosby engaged only in spots. The backing band is made up of fine session players, including a potential second generation of CS&N in Christopher Stills (piano/guitar) and producer Glyn Johns’ son, Ethan. Written in the span since their last album together and recorded during the first half of 1994, After The Storm is half collaborative venture/half solo showcase. Crosby can be cut some slack if he seems to come up short, having just released his own disc (Thousand Roads) in 1993. Stills comes out swinging with the breezy “Only Waiting For You,” the Latin-based “Panama” (a fine song, but a strange choice to close with) and “Bad Boyz” (not as bad as it soundz). But Nash gets the better moments, from the sere “Find A Dream” (with its shades of Neil Young) to the lovely title track (my favorite song on here). Also included is a languid version of The Beatles’ “In My Life” that feels appropriate given the nostalgic mood that attends every new CS&N release. And, not to be left out, Crosby’s “Camera” came out great. After all their audience has been through with them, After The Storm is a timely reminder that the raining kings of harmony remain with us.