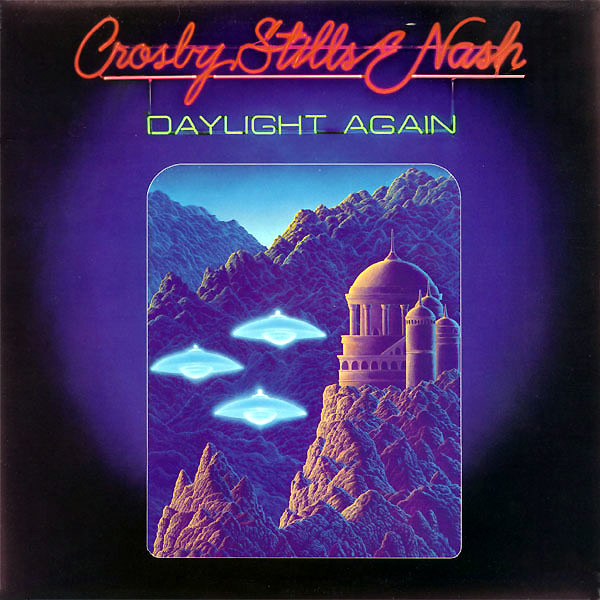 CS&N make their first important statement of the new decade with this platinum-selling reunion.

The re-reunion with the re-relapsing David Crosby should have been a disaster, but Stephen Stills and Graham Nash kept the boat afloat and sailed into the new decade with a platinum album and a pair of their biggest hits: “Wasted On The Way” and “Southern Cross.” The baffling album cover aside, Daylight Again is a throwback to classic CSN: the warm and ingratiating songs from Nash, the kickin’ country and rock contributions from Stills and even an airy vocal track from Crosby (“Delta”).

Financial motivation aside, the trio are truly greater as a whole than the sum of their parts. Yet this is a reunion in name only, as Crosby’s harmonies are handled mostly by backing vocalists Michael Finnigan and Timothy Schmit. Stills even goes outside of the band to recruit Art Garfunkel for the closing “Daylight Again.” So, while the harmonies may be a little different than you remember, the quality remains nearly the same.

With Stills writing the bulk of the material (getting assistance from Michael Stergis, Gerry Tolman and others), Daylight Again is not devoid of filler. More often than not, the songs resonate: “You Are Alive,” “Song for Susan,” “Into the Darkness,” “Too Much Love to Hide.” They’re a cut above what you’d usually encounter on a solo Stills or Nash album from this time. Closing with a reprise of the classic “Find the Cost of Freedom” and finding that it doesn’t feel out of place here shows that not so much has changed with CS&N since the 60s.

I keep going into these reunions expecting tarnished memories and instead end up leaving with my faith renewed. In fact, a good portion of this album provides what would today constitute classic CSN. Although the trio stuck together for a live album, Allies, they came unstuck again soon after, only to re-re-reunite in 88. Set your wayback machines for American Dream and I’ll see you there.

CD reissue bonus tracks
12. Raise A Voice
13. Feel Your Love
14. Tomorrow Is Another Day
15. Might As Well Have A Good Time (demo)