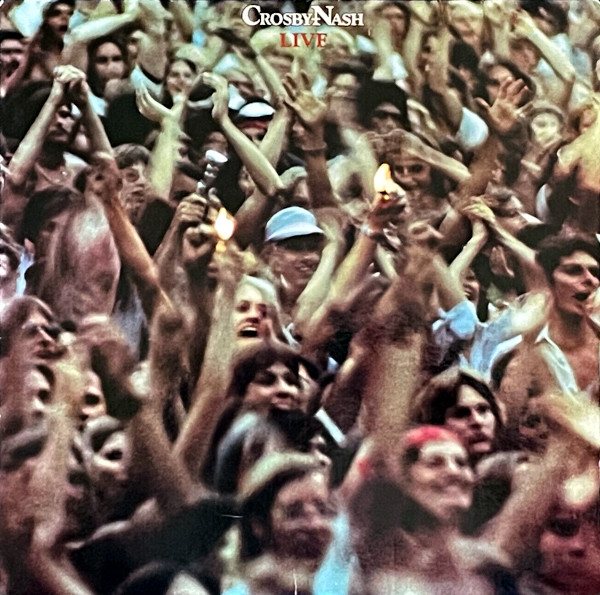 Just a live album before the walrus and the carpenter went their separate ways.

CSNY is a discographer’s green maze of delight. You have the CSN albums proper (they actually released one in 1977), the alliances (Crosby-Nash, Stills-Young), the solo albums, the genealogy (Byrds, Hollies, Buffalo) and the cameos. Kind of a self-sustaining ecosystem of soft rock, really. In fact, it’s a pretty big world; so big that an album like Crosby-Nash Live naturally gets lost.

Discovering a cut-cornered copy in a record store (as I did) fills out a branch on the family tree with one more leaf. If you’re out on the same limb thinking it looks a little thin, Live may leaf you happier. The digitally remastered CD version even adds two tracks.

Now, little on Live is going to change your world. The versions of “The Leeshore” and “Déjà Vu” are great, and David Crosby doesn’t hack up a lung or anything, so it has to be counted a success on some level. Still, you wonder how many people really came here salivating to see the pair sing “Fieldworker” or “Foolish Man.” The Crosby-Nash catalog isn’t exactly a gold mine waiting for rediscovery, after all. It was a business partnership, one that spared many of us from having to wade through six mediocre albums from Crosby and Graham Nash individually instead of three collectively.

If you’ve waded this far out, Live is something of a reward. The musical interplay is more interesting on stage than in the studio, and if the vocals aren’t, the Crosby-Nash vocal dynamic was never that magical to begin with. Out ending on a preposition.