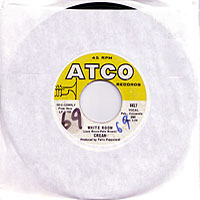 Cream recorded the instrumental tracks for this song in December 1967, making it the first of what would comprise the studio side of Wheels of Fire. The “false” opening of strings (or is it guitars?) creates a unique moment of suspense, quickly shattered when the song’s memorable main riff enters the scene. In that sense, this reminds me of the same effect that “Sgt. Pepper’s Lonely Hearts Club Band” employed with its orchestral tuning, although I’m sure every Cream fan collectively cringed at the comparison just now. The lyrics, inspired by Pete Brown’s new apartment (the white room), make brilliant use of light and dark imagery. As with “Sunshine of Your Love,” this song was edited down for the single, excising the verses that followed the first bridge (I think, since it’s been a while). The B side is the album version of “Those Were The Days,” written by Ginger Baker (lyrics) and pianist Mike Taylor (music). It’s a terrific song that references the lost city of Atlantis (ah, those were the days indeed). “White Room” has since been reissued on various back-to-back hit singles over the years, and was even used in commercials for Nissan (1995) and Apple (2000). Apparently, Atlantis isn’t all we’ve lost. Oh, yeah, and The Stranglers did an awesome version of “White Room,” which they included as a free single with The Raven if memory serves.