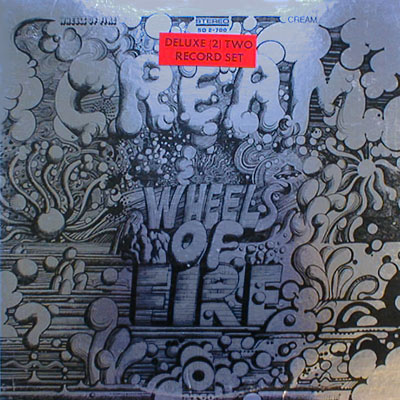 So here’s the rundown on Wheels of Fire, the band’s third release: it’s longer, stranger, but not necessarily better. Divided into two records (one studio, one live), history has salvaged a handful of songs from the Fire including “White Room,” “Politician,” “Born Under A Bad Sign” and the live versions of “Crossroads” and “Spoonful.” Yet the double album unquestionably sags in spots, especially on the last side, where the live versions of “Traintime” and “Toad” form a tepid postscript to what is otherwise an occasionally scorching opus. The studio cuts, on the other hand, often suffer from Felix Pappalardi’s overproduction/overparticipation  (Pappalardi is credited on trumpet, hand bells, viola and organ pedals). For prog-watchers, a few tracks clearly point to the burgeoning prog movement (“Passing The Time,” “As You Said,” “Those Were The Days”), while the nasty “Politician” prefigures King Crimson by a year. These cuts may not stun you like “Sunshine of Your Love” or “Tales of Brave Ulysses,” but over time they work their way into your imagination with a disarming cunning. The live side, recorded at the Fillmore, actually doused my enthusiasm for Wheels of Fire. You sort of figured that Cream could burn their way Robert Johnson’s catalog and turn “Spoonful” into a hearty meal, but I had no idea Ginger Baker could be so boring. Despite Baker’s dozen-plus minutes of drum doodling on “Toad,” his studio cuts are actually quite good, with “Pressed Rat And Warthog” neatly fitting the mold of the kooky drummer established by Keith Moon. What emerges from Wheels is an album’s worth of very good material spread across two records. It’s not the cream of the crop, but it still shakes out to an album’s worth of excellent music. [NOTE: This was also released as a pair of single albums, entitled Wheels of Fire – In The Studio and Wheels of Fire – Live At The Fillmore.]