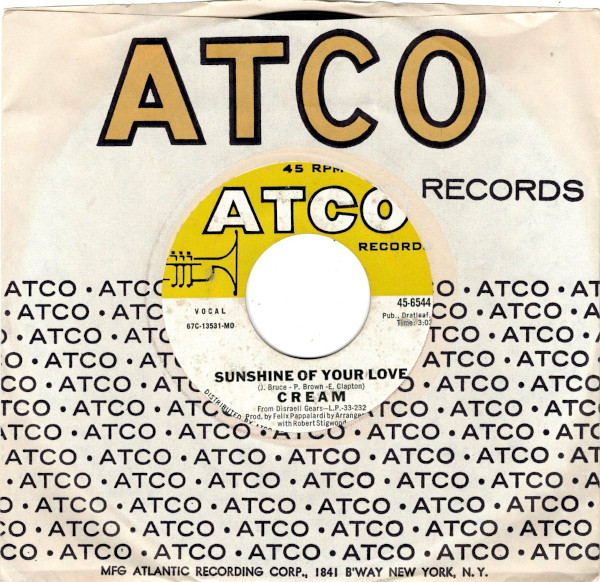 A twofer from Cream, featuring two classics: the psychedelic Sunshine and the strange bearded rainbow.

This was technically the first single from the band’s second album, since “Strange Brew” was released as a non-album single months before the release of Disraeli Gears. “Sunshine of Your Love” may well be the greatest song Cream ever wrote; the opening moments are indelibly written in the history of rock and roll. Reportedly inspired by Jimi Hendrix, its famous riff was actually written by Jack Bruce; Eric Clapton wrote the bridge (“I’ve been waiting so long…”). This Atco single features the song in an edited version (sounds like they just cut out some of the guitar solo, since who wanted to hear Eric Clapton’s guitar solos?, he asked facetiously). It also lists the artist as The Cream (the nerve).

Oddly, one of Disraeli’s best tracks was chosen for the B side, “SWLABR,” which stands for “She was like a bearded rainbow.” Identical to the elpee version, the B side is a classic example of Cream’s psychedelic blues rock, its inscrutable lyrics matched with a powerful blues-based riff. Ginger Baker’s drumming on both tracks is amazing.

Old Gold 7-inch Reissue
A1. Sunshine of Your Love
B1. Anyone For Tennis

Collectables/Timepieces 7-inch Reissue
A1. Sunshine of Your Love
B1. White Room