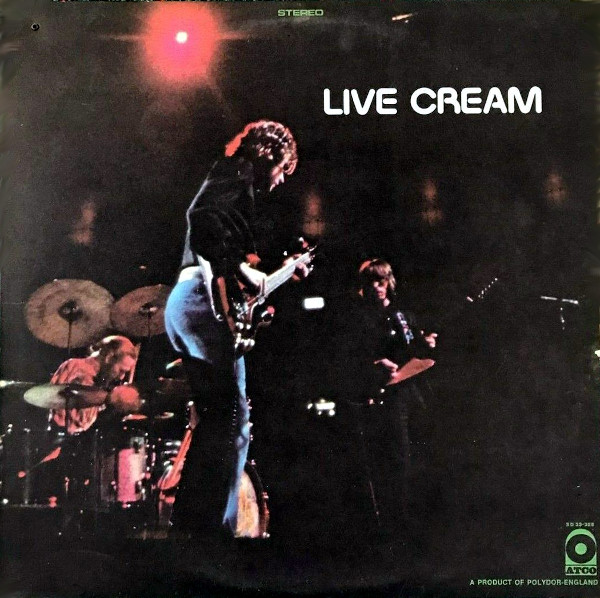 Live performances of the band’s earlier, blues-based material, recorded in 1968. Clapton is on fire.

Recordings of Cream’s live shows in San Francisco from the Spring of 1968 sprung up on two posthumous live records: the cleverly titled Live Cream and the equally cleverly titled Live Cream Volume II. Fans snatched them up, of course, and a few critics even creamed themselves with purple prose to praise the dead, but both records are nothing more than a cash-grab by the labels. Proof that this was a planned heist: they separated the material from the first and second albums, so that Live Cream in effect became Fresh Cream Live and Volume II became Disraeli Gears Live. As a bonus (not really, since the entire record runs less than 40 minutes), Live Cream features a studio outtake, Lawdy Mama, that will be instantly familiar as the original version of “Strange Brew.”

For almost any other band, these live perfomances would have been pulled out of the vaults, dusted off and tacked onto the album remasters as extra tracks. This being Cream, however, the tombs had long been raided by the 1990s. There is pleasure to be had in hearing the band tear through versions of Sleepy Time Time, Sweet Wine and N.S.U. Eric Clapton is an absolute fiend on guitar. But if the live material on Wheels of Fire and Goodbye didn’t rock your world, you can leave this stone unturned.

Now, I did enjoy the next installment, Live Cream Volume II, a lot more, in the same proportion that I enjoyed Disraeli Gears more than Fresh Cream. Cream had changed considerably since their first album, and you get the sense that they were approaching this early material with a grandiloquent eye. They hadn’t worked out the arrangements to support the longer run times, apparently, and so what you get is a lot of soloing, some of which is amazing while other sections seem stretched thin. Live Cream isn’t the first (or second or third) Cream record you need to buy, but there’s still marrow in these bones, provided you’re in the wight frame of mind.