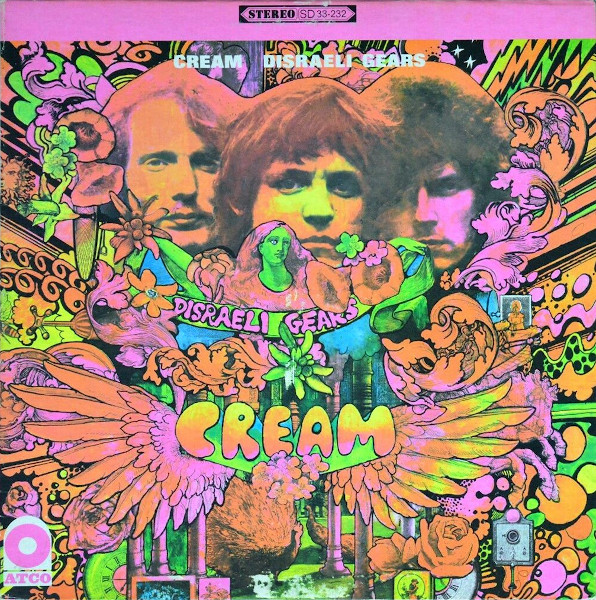 A technicolor trip through the psychedelic blues-rock tulips of Baker, Bruce & Clapton.

Kronomyth 2.0: So many fantastic colors.

Cream’s second album is one of the earliest examples of progressive rock. Compared to other “artifacts” from the 60s, Disraeli Gears is an Aladdin’s lamp with a genie as accommodating as any to issue from the work of Jimi Hendrix or The Doors. As the cover suggests, this was transportative stuff at the time (and still is): Cream serving as the stylish sportscar alongside Hendrix’ hog or The Doors’ diesel truck in the highways of the mind.

Part of the album’s appeal is its beautiful inscrutability. Swlabr, Sunshine of Your Love and Tales of Brave Ulysses replace sense with sensory overload. Those three songs and Strange Brew represent a quantum leap forward from Fresh Cream, which was itself a groundbreaking album. In between those miniature monuments of progressive rock are a few silly sidetrips (Mother’s Lament, Blue Condition), a couple of psychedelic holdovers (World of Pain, We’re Going Wrong) and the blues-rock that never left (Outside Woman Blues).

Although producer Felix Pappalardi deserves some credit for providing a more progressive prism for the band’s ambitions, it’s the primary combination of Baker, Bruce and Clapton that form the source of so many secondary colors on Disraeli Gears. Jack Bruce is the sturdy captain straddling the prow in tempestuous waters, Ginger Baker is the cosmic joker with a stolen bag of thunderbolts slung over his back, and Eric Clapton is the legendary pyromancer, brilliant and burned out. This most colorful chapter in Cream’s history had a profound effect on the music of King Crimson, Van Der Graaf Generator, Pink Floyd, Led Zeppelin and even The Beatles. Cream’s legacy rests on four albums and, honestly, their star would shine as brightly through the ages if those other three albums got sucked into a black hole, so long as we still had Disraeli Gears to ponder.