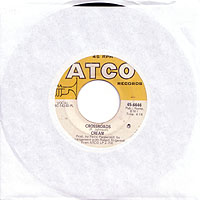 Kronomyth 3.2: PAST TIME (FOR WHOM THE TUBULAR BELL TOLLS). The second single from Wheels of Fire came from the Fillmore side, a live version of Robert Johnson’s “Crossroads” in its unedited album form. Clapton added some new lyrics to the original and stamped his distinctive electric guitar on it, and it might be said that this “Crossroads” is uniquely his own. Oddly enough, over the years, the song “Crossroads” seems to have acquired a curse, beginning with the premature death of its original author. The crossroads is a symbol for a meeting place between two worlds, and it has been suggested that Johnson was referencing a pact with the devil on this song. (I would tell you the operative agent is Ahmet Ertegun, but I’m an inveterate rumormonger who sees tigers crouching in every corner.) The B side is one of Baker’s clever bits, “Passing The Time,” co-written with Mike Taylor, who strangely sadly drowned on January 19, 1969 at age 31—the same month this single was released. Which is, of course, simply (tiger!) an unfortunate coincidence.