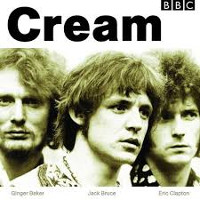 Kronomyth 12.0: The Baker Bruce Clapton Sessions. Thirty years on and thensum, the BBC released recordings of another BBC—Baker, Bruce and Clapton—that capture Cream in their early heyday (October 1966 to January 1968). It seems, students of ancient history, that musicians were concerned their fans wouldn’t buy the new records if they could hear them for free on the radio (unthinkable today I know, ahem), so the Musicians Union (not to be confused with the equally maligned Yes’ Union) placed a limit on how often radio stations could play singles and album cuts. Enter the crafty folks at BBC, who found a workaround by having bands like the Cream record new versions of their songs in the BBC’s own studios, which they could then play on the radio to their heart’s content. Of course, radio stations weren’t so much concerned with sonic fidelity as the record labels, and with minimal ovedubs a fair approximation of the original was considered sufficient for broadcast. All by way of saying that you can say goodbye to high fidelity on this disc. But Cream didn’t just dial it in for the BBC; they actually played the snot out of these songs in some cases. I’ll take these renditions of “I’m So Glad” (now with a mock-classical solo worthy of Jimi Hendrix himself), “Steppin’ Out” (the 1968 version), “Take It Back,” “Strange Brew” and “Tales of Brave Ulysses” over the official live versions any day. What’s really neat about the BBC sessions, however, is their compactness. Some of these songs are actually shorter than the original studio versions, and four of them clock in at under two minutes. While the music is enjoyable on its own, Cream fans will also appreciate the historical significance of some of these songs. Here, for example, you’ll find the first version of “Politician” (recorded for the occasion, no less) and the first recorded versions of “Steppin’ Out,” “Crossroads,” “Traintime” and “Lawdy Mama.” If the original motive for these recordings was profit, then consider it a job doubly well done, as we can all profit from hearing them today.