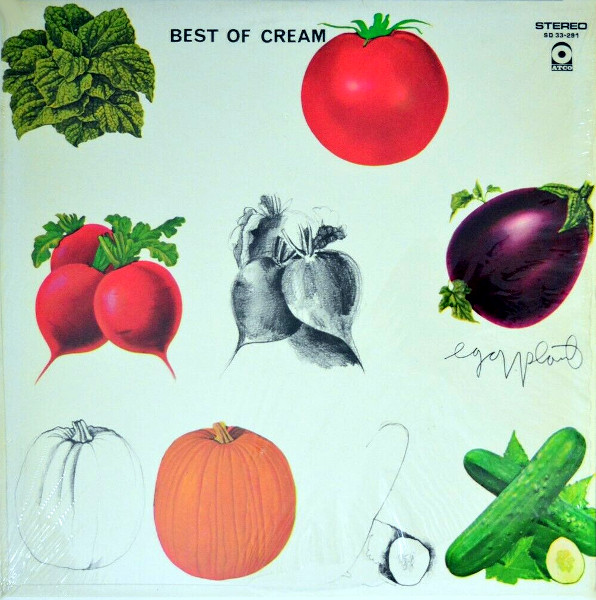 Well, that was it, four albums. Thanks for coming.

With a name like Cream, I suppose it’s only fitting that their labels milk them for all they’re worth. The release of Best of Cream coincided with the debut album from Ginger Baker’s and Eric Clapton’s new band, Blind Faith, and followed Cream’s Goodbye by only a few months, yet fans still snatched it up—a testimony to the band’s popularity at the time.

While the US album cover, featuring drawings of vegetables, may be beyond mere mortal comprehension (for a great band they really had some bizarre album covers), it’s easy to understand why people would pay good money to hear the best of Cream. The selections here are unimpeachable, if not surprisingly weighted toward their first three albums (only one track, “Badge,” appears from their last). The presence of “Spoonful” and “I Feel Free” could also be considered a kindness to collectors, since one or the other would have been a non-album single depending on which version of Fresh Cream you owned.

Of course, since the release of this album, dozens of Cream compilations have cropped up, not a few of them named Best of Cream. The future, with its compact disc and jet cars, had little use for a 10-track Cream compilation, and so Best of Cream was allowed to languish without so  much as a digital remaster (it did get a 180g vinyl reissue some years later). If you should encounter it in a used record store somewhere, it’s worth picking up for five dollars, but I wouldn’t pay more than $10 for it unless you’re planning to encase the album cover in Lucite and use it as a cutting board.

Cover by Jim Dine. Back liner photo by Jim Marshall.