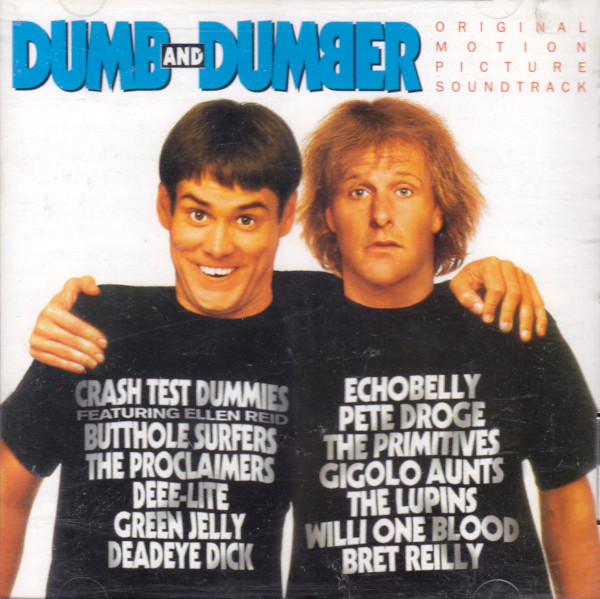 Forty minutes of Jeff Bridges’ looped farting would have been the higher road.

Dumb And Dumber was a stupid movie that got the soundtrack it deserved. Not that I have any sympathy for soundtracks; they’re nothing but after-market product ninety-nine percent of the time. This soundtrack was unusual in that it was released before the film, but such was the cachet of Jim Carrey in 1994 that an album simply bearing his likeness was likely to sell.

The soundtrack generated a handful of singles and very nearly launched the careers of Deadeye Dick and Willi One Blood, both of whom enjoyed national exposure as a result of their contributions to the soundtrack. (In fairness, Deadeye Dick had already enjoyed a local breakout in Louisiana with “New Age Girl” before it was picked up for the soundtrack.) Echobelly also got some much-needed US exposure with their song, “Insomniac,” which occasioned their first U.S. tour. And, of course, there was the failed launch of Ellen Reid as a solo artist, sort of, on Crash Test Dummies’ unforgivably timid cover of XTC’s “The Ballad of Peter Pumpkinhead,” which is what brought me here in the first place.

Music in the mid-nineties was garbage, except for Garbage and a handful of bands who managed to emerge from the MTV music machine with their dignity intact. Rock and roll had been smoothed over to the point that its soul had been squeezed out. “If You Don’t Love Me,” “Too Much of a Good Thing,” “Crash,” “Take” and “Where I Find My Heaven” are likeable enough, and that’s exactly their problem. You get the sense that bands in the 90s were part of some unholy assembly line where a good hook, a dash of personality and the specter of menace/pain were put into the mouths of detachable heads. Maybe it has always been this way with popular music.

Although I didn’t like the movie, I wanted to like the soundtrack, and I really wanted to like the Dummies’ take on XTC. But it’s just a waste of four minutes. The video is even worse, completely ignoring the song’s JFK overtones for a shameless movie plug, with Reid thrust into the fore, clothed at the cutting edge of whatever fueled the fashion of Friends. Apparently, the song was already part of the Dummies’ live show, which is where producer Ron Fair first heard it, and the rest (as they say) is herstory. One can only imagine it sounds better live.

There are a few redeeming spots on the soundtrack: Butthole Surfers’ choppy version of Donovan’s “Hurdy Gurdy Man” (first released in 1990) is silly and spooky, while Hot Chocolate’s “You Sexy Thing” is predictably de-lovely and delicious in the hands of Deee-Lite. There’s also something strangely satisfying about hearing Smokey Robinson sung by Scotsmen (The Proclaimers’ version of “Get Ready”). No such love, however, for songs by The Lupins (“dickless Jane’s Addiction,” I wrote) and Green Jellÿ (“cuddly Gwar”). You’d have to be dumb to buy the compact disc, but even dumber to shell out for the audiophile double elpee.