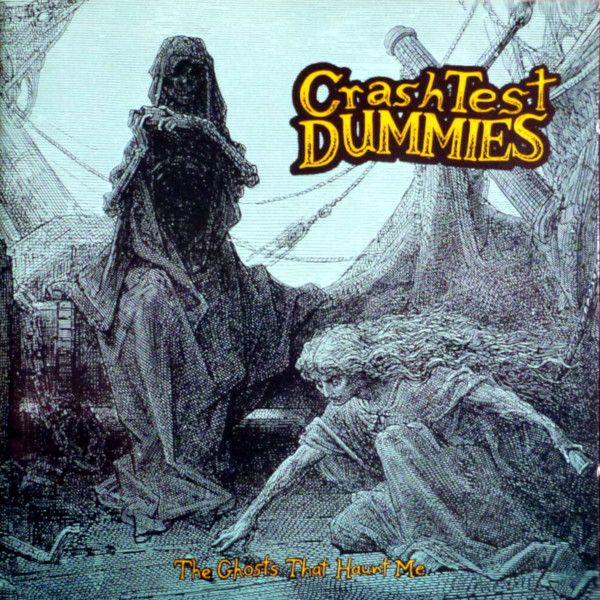 The debut album from an eccentric folk-pop band whose fortunes were about to take off.

A folked-up debut by a Canadian foursome that leans to the left of normal. Possessed of a profound baritone, vocalist Brad Roberts sounds like the grim reaper come a-courting. His delivery is sweetened by a sense of humor and a keen understanding of the human condition. “Superman’s Song” bespeaks this best, stripping the man of steel down to a level that resonates with our own daily challenges. (If you liked “Mmm Mmm Mmm Mmm,” you’ll find this just as tasty.) There’s also an authenticity on The Ghosts That Haunt Me that makes it feel like an antidote to the angry metal angst of the Seattle sound.

Crash Test Dummies‘ debut isn’t quite alternative rock, this despite a neat cover of The Replacements’ “Androgynous.” In looking for a precedent, I might point to fellow Canadian Bruce Cockburn. Violins, mandolins, banjos, accordions, penny whistles and harmonicas give the album the flavor of a folk revival, which fans of their followup might find offputting. Brad Roberts is the same songwriter on both (compare “The Funeral” to “God Shuffled His Feet”), but the production is markedly different; hardly any folk traces remained for God Shuffled His Feet.

While “Superman’s Song” and “Androgynous” are the two songs I return to most, Ghosts is strong from beginning to end. “Comin’ Back Soon,” “The Country Life” and “The Ghosts That Haunt Me” would each warrant consideration in a career retrospective of the band. If the idea of a banjo solo doesn’t turn you green, Ghosts shouldn’t scare you. Of course, no harm done if you just want to download “Superman’s Song” to your iPod. It’s a great song that revealed to me for the first time the difference between the secret identities of Spiderman (“Why can’t everyone see how great I am?”) and Superman (“Why can’t everyone see how great my Dad is?”).

A1. Winter Song
A2. Comin’ Back Soon (The Bereft Man’s Song)
A3. Superman’s Song
A4. The Country Life
A5. Here On Earth (I’ll Have My Cake)
B1. The Ghosts That Haunt Me
B2. Thick-Necked Man (Benjamin Darvill)
B3. Androgynous (Paul Westerberg)
B4. The Voyage
B5. At My Funeral

All songs written by Brad Roberts unless noted.

Design and photography by Kevin Mutch. Illustrations by Gustav Doré.