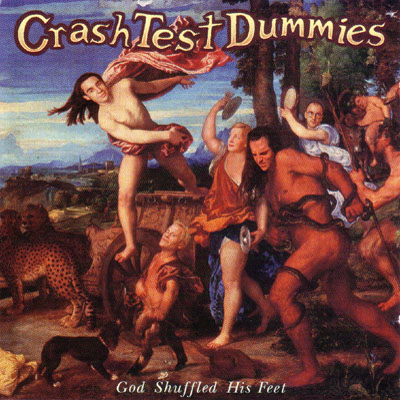 The beautiful bullfrog prince of the new age, kissed by the M-m-muses briefly but deeply.

Kronomyth 2.0: Once, there was this band…

This is the band’s big money shot, and they’ve never come close to making another album like it. The ghosts of their first album don’t even appear until the tenth track. Co-produced by Jerry Harrison and mixed by Tom Lord-Alge, God Shuffled His Feet is the band filtered through the recent lens of XTC. Everything is given a remarkable spit and polish, the bass and drums are pushed to the max in the mix, and you have the sense that the producers were swinging for the fences on every track.

If it sounds like I’m criticizing the album, I am a little, just because it’s overwhelming sometimes when the band does underwhelming equally well. There are some fantastically smart songs on here: “Mmm Mmm Mmm Mmm,” “When I Go Out With Artists,” “God Shuffled His Feet.” Fans of early 90s pop should own this album just for those tracks. In fact, the band is so good that I was sure they would carry the mantle of modern pop into the future for years to come. Brad Roberts seemed the perfect anti-pop hero: quirky, intelligent, with a dark sense of humor and a distinctive delivery. God had other plans, but that’s another story.

While I’m sure some people, presumably younger people, have fond memories of music in the early 90s, the period for me will always be synonymous with compact discs and heavy mixes. The trouble with compact discs is that they put pressure on bands to fill them up with more music. Invariably, two or three songs would end up on the compact disc that simply weren’t very good. “Here I Stand Before Me” and “How Does A Duck Know?” are two examples of songs that probably should have stayed at home. The heavy mixes (and Tom Lord-Alge was a common offender) often buried simple songs in too much makeup. I had the same reaction to Suzanne Vega’s Days of Open Hand, as though every song were trying too hard.

Now that I’ve deflated the Dummies’ second album, I can tell you that I’m an unabashed fan of it. The sequence of “God Shuffled His Feet,” “Afternoons & Coffeespoons” and “Mmm Mmm Mmm Mmm” was a revelation to me. As someone who already had Skylarking, Oranges and Lemons and Naked in heavy rotation in my head, God Shuffled His Feet was a natural fit. Unlike most cherrypicked discs, I listened to it straight through and loved how it ended on a gentle quieter note with the trio of “The Psychic,” “Two Knights And Maidens” and the instrumental “Untitled.”

In the early 90s, I believed that the Dummies, Toad The Wet Sprocket and The Spin Doctors were going to save pop music from its own self-importance. I was wrong, but I still have God Shuffled His Feet to remind me of what might have been. Truly, we had met the dummies, and they were us.

A1. God Shuffled His Feet
A2. Afternoons & Coffeespoons
A3. Mmm Mmm Mmm Mmm
A4. In The Days of The Caveman
A5. Swimming In Your Ocean
A6. Here I Stand Before Me
B1. I Think I’ll Disappear Now
B2. How Does A Duck Know?
B3. When I Go Out With Artists
B4. The Psychic
B5. Two Knights And Maidens
B6. Untitled

All songs written by Brad Roberts.

[Review] Crash Test Dummies: The Ghosts That Haunt Me (1991)