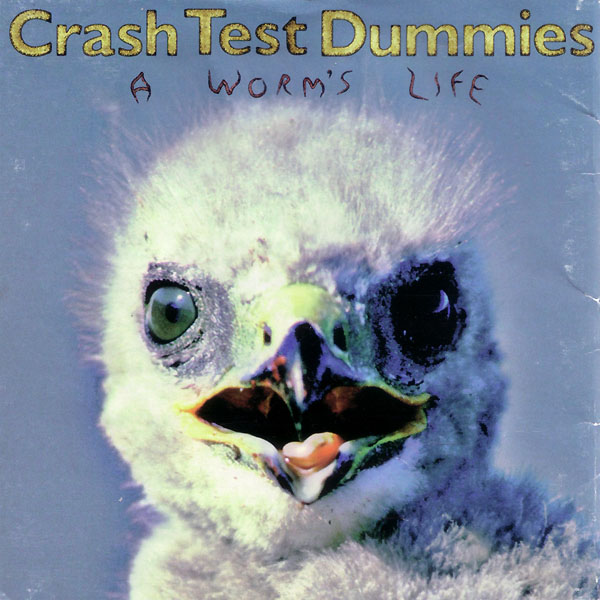 The long-awaited followup to God Shuffled His Feet displays the same sense of humor but lacks a breakout single.

The Dummies waited three years to release a followup to God Shuffled His Feet, by which time “Mmm Mmm Mmm Mmm” was a distant, delicious mmmemory. It hardly boded well for the future that Brad Roberts, whose songs had always seemed oddly autobiographical, writes not one but two songs about writer’s block (“An Old Scab,” “Swatting Flies”). Critics reacted by calling the album both too radical a departure from their past (“noisy” is commonly cited) and not enough of a departure.

Now, before I launch into a defense of A Worm’s Life, know that the copy I listened to was cracked, rendering the first four songs unlistenable*. (A beacon of quality, this site.) So the best you’ll get out of me today is a review of the last two-thirds of A Worm’s Life. My general impression is favorable; “I’m Outlived By That Thing?” and “My Own Sunrise” follow in the footsteps of their last. If the rest of the songs are more memorable for Brad’s basso profundo and everyday absurdities, the same could be said about the bulk of their work so far.

The real disappointment of A Worm’s Life, I suspect, came in the realization that the Dummies could not be counted on to save the world, but merely to carve out a small portion of it for themselves every few years. With the forced reduction in expectations, a backlash was inevitable. As for the criticism about it being a noisy album, no, not really. Steve Berlin and Jerry Harrison are different producers who shaped the band’s sound into their favored image. Produced by Brad, brother Dan and Mitch Dorge, A Worm’s Life is perhaps truer to their own image of themselves, which resembles a kind of Canadian XTC (e.g., “My Enemies”). Again, that’s based just on the two-thirds I’ve heard, which you might logically extrapolate over an entire album or just as logically dismiss as incomplete evidence. It didn’t suck as much as I’d read, though, which is all I really wanted to say.

* Nine years later, I got around to listening to the first four tracks. The opening “Overachievers” is surprisingly noisy but also very good; essentially a rewrite of “Mmm x 4” that ties three different stories together. The group had originally planned it as the album’s single, but finally opted for “He Liked To Feel It,” which sounds a lot like XTC’s “The Disappointed.” The title track tells the (autobiographical?) story of a worm that wakes up in a bottle of tequila bottle, and “Our Driver Gestures” appears to be based on Brad Roberts’ extended travels in the interim since their last album. Honestly, it’s the album’s only beneficiary of Brad’s globetrotting; the rest of the songs could have been written just as easily by staying in a dark room and listening to XTC’s Nonsuch. And, of course, their last album, which a lot of us were still doing.

All songs written by Brad Roberts.

[Review] Crash Test Dummies: The Ghosts That Haunt Me (1991)