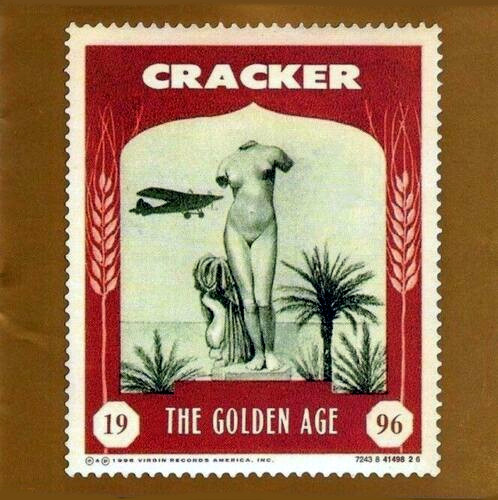 No, it didn’t go gold, but it didn’t tarnish Cracker’s reputation among the musically informed either.

Kronomyth 3.0: The cowboy is sad because he has no friends.

After a too-long hiatus of two-and-a-half years and with a new rhythm section in tow, David Lowery and Johnny Hickman released The Golden Age. In the interim since their last album, musical audiences got bored with grunge and Kurt Cobain got bored with life, although the former memo never made it to the masterminds behind the video for “I Hate My Generation,” which featured Lowery yelling at a bunch of old people in ridiculous poses. I get the appeal of putting up Lowery as a posterboy for alternative rock, but songs like “I Hate My Generation” and “Nothing To Believe In” border on parody.

And if the sound of this, it frightens you, we could play it real cool and act somewhat indifferent. – “Big Dipper”

I have, truth be told, an uncomfortable relationship with Cracker. My loyalties lie with Lowery and Camper Van Beethoven, but with each all-too-obvious hit single (“Teen Angst,” “Low”) those loyalties fade a little. At the same time, Cracker manages to stir up those same loyalties with their sense of humor (“How Can I Live Without You”), oddball bar-chord fury (“100 Flower Power Maximum”) and wide-open, wistful and lonesome blues (“Big Dipper,” “The Golden Age”). A good song is never more than a few minutes away, but a homecoming to those long days of June and key lime pie doesn’t appear to be forthcoming, and I’m not sure whether I love Cracker because they sound like CVB or hate them because they don’t sound enough like them.

If all that sounds unduly serious, so does The Golden Age. There are few lighthearted moments on this album. “Big Dipper” (one of the prettiest and saddest songs they’ve ever recorded), “The Golden Age” and “I Can’t Forget You” are downers by design; you’d need an army of little rocket ships to pull the album in a positive direction after so much heaviness. Yet listening to Cracker crash and burn is a kind of pleasure. Feeling low for Lowery is like feeling high for anyone else. So if I tell you that The Golden Age shines just as much as their first two records, it’s with the understanding that in the world of Cracker all that glitters is not gold.

Worth mentioning here somewhere is the fragile connection that Frank Black, Cracker and Sugar have with their former bands (Pixies, Camper Van Beethoven, Husker Du). At some point, it makes sense to stop comparing them to their former bands and start comparing them to each other as the increasingly elder statesmen of the 80s alternative movement (or whatever we’re calling it now). Cracker compares favorably to Black; “100 Flower Power Maximum” even sounds like a Frank Black song. All three may have overplayed their hands in leaving their former bands, yet like so many sequels we stick around to see the characters we love walk across the screen one more time. The dynamic between Lowery and Hickman is certainly different than CVB (no violins, quasi-Russian folk music or noisemongering), producing alternative rock with a tasteful infusion of American blues and country. The original vision was, well, more original, but there are still plenty of interesting sights to take in on The Golden Age and their earlier two albums. I’m not really sure where that leaves me, other than queued up to hear the next Cracker album, whenever that arrives.

All songs written by David Lowery and Johnny Hickman unless noted.