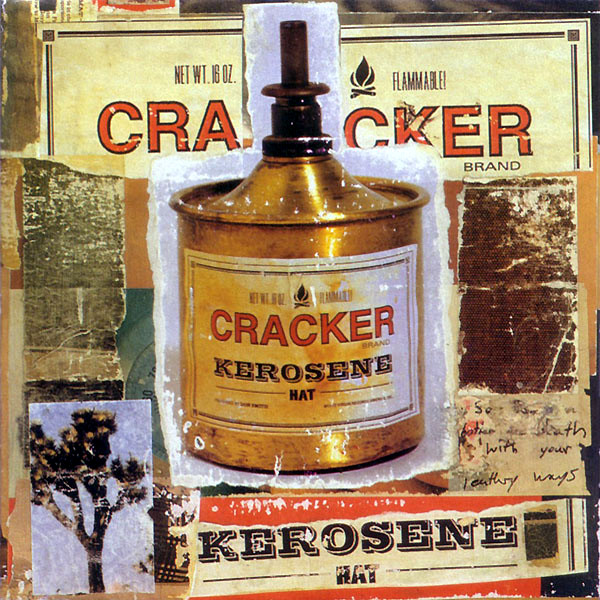 Cracker’s second album is a more worthy successor to CVB, with songs that actually rock (“Low,” “Get Off This”).

Kronomyth 2.0: Hats off to Cracker.

This is the part of the story where our hero, taking a hiatus from highbrow jazz reviews, rediscovers his inner Cracker and with it the disturbing revelation that he could listen to David Lowery sing the words “titty ring” on an endless loop all day. “Low” and “Get Off This” are currently in heavy rotation in my mind. Sometimes I decide that the secretly stashed “Euro-Trash Girl” (track 69) is worth an extra sixty clicks, and rarely begrudge “I Ride My Bike” another twenty.

At its best, Kerosene Hat invites comparison to those absurdist and absurdly catchy Camper songs (“Nostalgia”). At its worst, it sounds like flat Camper outtakes (“Take Me Down To The Infirmary”). I’m not building a Cracker Van Beethoven mythology yet; the dynamics are different. Yes, there’s still Lowery’s nasal-drip delivery and absurd sense of humor, the ghost waltzes (“Kerosene Hat”) and alt-country/punk rock adventures. But CVB wouldn’t have done a serious reading of “Loser” or played a straight country song like “Lonesome Johnny Blues.”

It’s tempting to see Cracker as just another alternative icon slouching their way back into the spotlight (and into our hearts) with bar-chord fury and half-baked ballads like Bob Mould, Paul Westerberg and Frank Black. But Cracker is more fun, less predictable and, okay, maybe guilty of a little more mainstream baiting in ready-made anthems like “Low” and “Get Off This.” Hiding two killer songs from their last EP in a nest of “hidden” tracks is just the kind of bribe that makes me look the other way when charges of commercialism come up. Color me one happy Camper with Kerosene Hat.