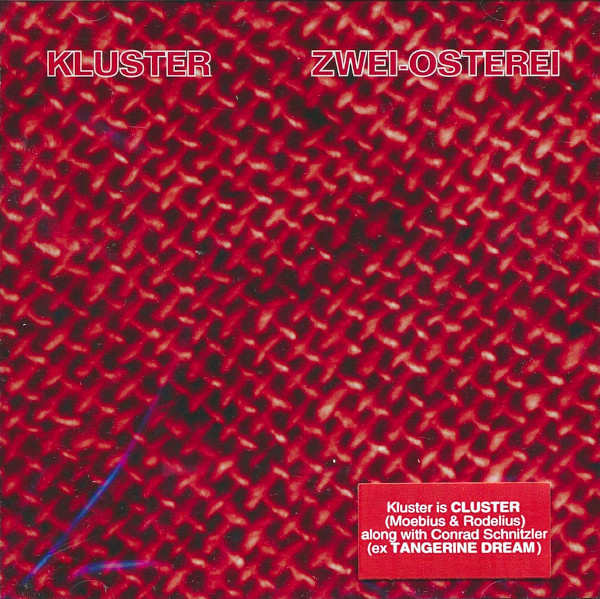 The second fantastic journey into the dark void of Kluster is a modern trio for science equipment and mutilated strings.

To hear it told today, these two experimental pieces were funded by a local church, which resulted in religious text being added to the first piece. If true, Zwei-Osterei (translated as “two Easter eggs”) is some of the most profane music to come from the church since Carmina Burana. The record is most like Klopfzeichen, which is to say unlike anything else except maybe the earliest recordings of Tangerine Dream. In fact, whether this constitutes music at all is open to debate. Some musical instruments are employed in the making, yes, but they’re not played so much as scratched, struck and tortured.

Electric music und Texte sounds, at various times, like a soul lost in Limbo, a submarine under attack and the internal, chastening voice of the Super-Ego in the chaotic mind of a madman. What it doesn’t sound like is church music, unless we’re talking about The Church of Satan. The opening moments feature Kluster’s three members on electronics, drums and what I presume is a cello, plus the commanding presence of Manfred Paethe. The addition of Paethe, a German film actor, creates a fascinating dynamic between the real and the surreal, as if the listener were deep in their own, terrifying subconscious while being hounded to return by their own conscious mind. The sum effect is frightening and fascinating. You can’t help but follow the strange shapes and sounds deeper into the darkness, drifting further and further from reality into the dark void.

Electric music (Kluster 4) employs an actual rhythm on which to hang its eerie array of electronic sounds. It’s not as dark as the first track; there is no narration, just a steady rhythm, a drone and what could best be described as a mad scientist gleefully cataloguing sounds from his various electronic devices. It’s important to note that the music of Zwei-Osterei doesn’t feel random. It’s one thing to twist a bunch of knobs and switches, but quite another to do it with purpose. Kluster is experimenting with music, but not with their “musical” instruments; they manipulate sound with an internal map.

In discussing the “impact” of an album like Zwei-Osterei, it’s important to note that these albums initially reached a very limited audience. I’ve read, for example, that only several hundred copies of Zwei-Osterei were initially produced. Presumably, hopefully, those early listeners didn’t fall into madness. As the legend of Kluster grew, Zwei-Osterei and Klopfzeichen were re-issued for mass consumption, relatively speaking. Today, they can be appreciated as groundbreaking, experimental works in electronica and sound, similar to—yet frankly stranger than—the early works of contemporaries like Tangerine Dream.

Given the relatively small community of German electronic sound pioneers at the time, it’s very likely that Kluster’s works were known, at least in passing, by their colleagues. Whether this music was widely influential is another story, although it most certainly had an influence on the subsequent careers of its participating members: Conrad Schnitzler, Cluster and Conny Plank. Today, the first two volumes by Kluster stand as some of the most daring electronic music of their age and can be highly recommended to fans of experimental music as true adventures in sound.

* These pieces were credited as “Part One” and “Part Two” respectively on subsequent CD reissues.