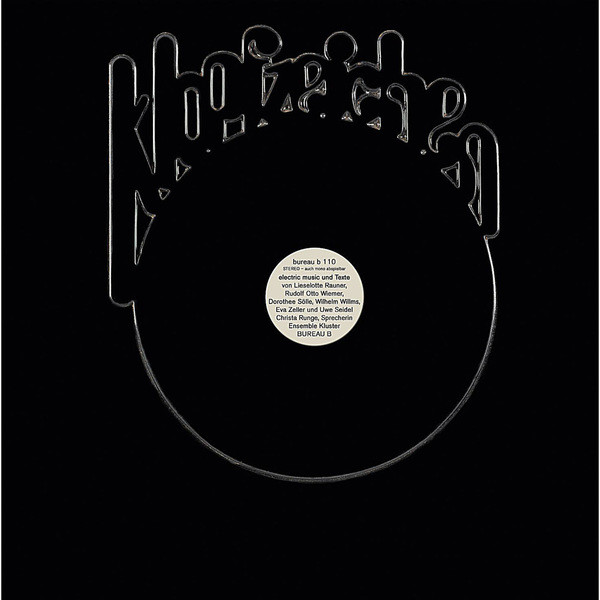 The first Kluster album is an even stranger, darker journey than Tangerine Dream’s first album, with poems encased in the first half.

In the world of Kluster, time doesn’t exist. Space is all that exists, an endless black that extends beyond the range of human senses. But this isn’t an empty space. There is poetry and there are people making noises. Hammered, plucked, throbbing, pulsing noises that, in the absence of other sounds, could be music. It’s a decision you, as the listener, make: Do you embrace the noise as music? In the absence of light, reference points are meaningless, figments of the imagination clung to for comfort.

You have been on a similar journey, Electronic Meditation. One of the men in the dark making the music now, Conrad Schnitzler, was there too, credited with metal bar and burning parchment. He brought both into this new world, Klopfzeichen. Dieter Moebius and Hans Roedelius are also in the dark with him, building their collective nightmare world with surreal sounds that may or may not have been proper instruments before their souls were banished to the magnetic beyond of Klopfzeichen.

Although a continuous piece of music divided into two halves, the first half is easily distinguished by the appearance of various poems by different authors, read by Christa Runge (Conrad Schnitzler’s wife), waystations on a journey through darkness/madness. These could be seen as a highly avant-garde interpretation of lieder or the merger of two mediums into a new kind of performance art. Whatever the original design, if in fact one existed, the effect is not soon forgotten, delving into even darker corners than Tangerine Dream dared, a sort of tangerine nightmare.

There is no progression because there is no beginning or end. Sounds emerge, disappear, the eye is struck dumb in the blackness and the listener sees with their ears. Maybe you hear the sound of a flute escaping like steam from a cracked pipe. Maybe a cello is curled in an imagined corner moaning as a means of self-soothing. There is only you and the blackness and sound. Like the fun houses of old, it’s not what’s lurking in the darkness, but what’s lurking in us that the darkness releases.

Now, Klopfzeichen isn’t everyone’s cup of black tea. It is possible that, after hearing Electronic Meditation, you said “Bah, pussyfooters!” and yearned for something stranger. Possible, but unlikely. It is an album worth hearing at least once to expand your understanding of the potentialities of music. If you really enjoy experimental music (of if persistent houseguests are a problem), you may want to invest in a copy for yourself.