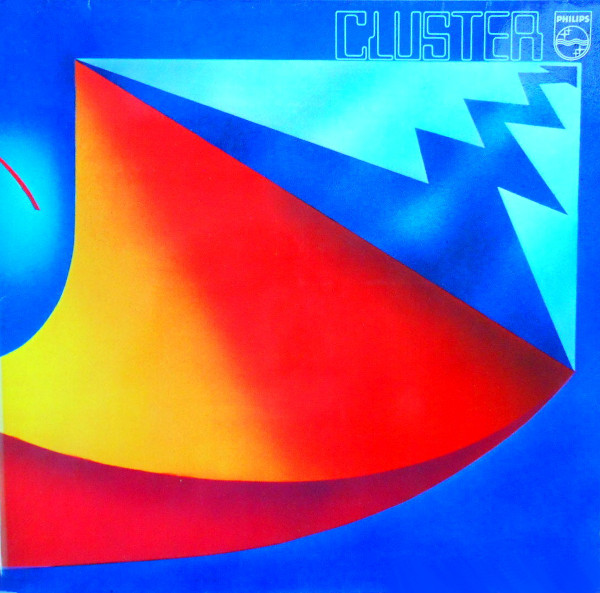 This is music with no melody, no rhythm, no motifs and no musical instruments. In other words, it isn’t music in any familiar sense at all. Now, if you’d heard the original Kluster albums, you probably expected as much from Hans, Dieter and Cluster with a C. But very few people heard the original Kluster albums, whereas Cluster’s debut album was released on a major label, Philips, which gave their “music” more exposure. Thus, Cluster (later packaged as Cluster ’71) became an influential album in the early development of electronic music. I guess. In 1971, my concept of art didn’t extend past the world of play-doh.

If Pink Floyd and Tangerine Dream were making space music, Cluster was making far-outer space music. There is no linear journey here, no corporeal rhythm to grab hold of. It is amorphous, formless, void of anything familiar. In that sense, the sounds presented here are both liberating and terrifying. Unless you believe this is just a bunch of wire jockeys twisting random knobs, and I’m not ruling that out.

What I could appreciate about Tangerine Dream is how they connected, at least logically, to both modern classical music and rock & roll. Cluster is completely disconnected from music. In fact, in describing this music, musical terminology is useless. There are pulses rather than rhythms, splashes of noise rather than notes, electrical currents in place of composition. That the songs are nameless and identified only by time is fitting, since the sounds occupy time as a space but have no clear beginning or end.

All of the Kluster/Cluster albums, which are now available through reissues, are interesting extensions of music concrete, though whether they advance the medium past what Karlheinz Stockhausen had put forward in the 1950s is questionable. In the twenty years since Stockhausen’s “Etude,” the world hadn’t noticeably warmed to the notion of electronic sound as a form of musical expression. It still feels alien, although Cluster’s drone-like presentation is more soothing than the work of Stockhausen or Pierre Henry. Perhaps Cluster’s most important contribution is as a link between music concrete and electronic meditation.