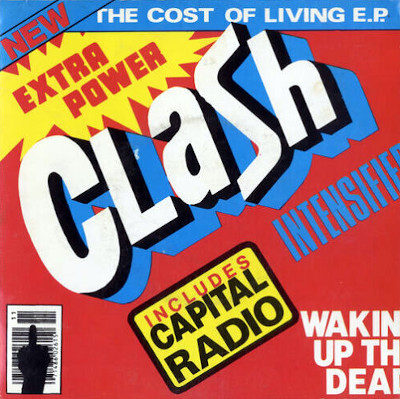 Christmas come early as The Clash shove their extended seven-incher into the face of middle-class decency.

With punk’s live-fast/die-young aesthetic, waiting an entire year to release a new album simply wasn’t going to cut it, so The Clash released an extended -play single, The Cost of Living, to keep the bonfires burning until London Calling came. The four tracks showed a step forward in musical development since their last album, with co-producer Bill Price helping the band capture a cleaner sound than Give ‘Em Enough Rope. It accomplished everything it set out to do: kept The Clash on the tongues of the press and in the hearts of fans.

Although an explosive cover of the Sonny Curtis song, “I Fought The Law,” became the hit, the real stunner here is a polished version of “Capital Radio,” which originally formed part of their early live setlist. It’s just a perfect song, four minutes of controlled chaos directed with deadly aim at the quivering status quo with The Clash’s own four-minute jingle for the musical establishment that was Capital Radio. In between these two burning bookends are “Groovy Times,” Joe Strummer’s tongue-in-cheek assessment of the times, and Mick Jones’ “Gates of the West,” which romanticizes the band’s success across the pond. Interestingly, The Clash seem to have brought a bit of Bruce Springsteen back with them. (If you like this song, you owe it to yourself to check out The Boomtown Rats’ A Tonic for the Troops.)

So there you have it, a seven-inch Molotov cocktail hurled into the streets of London while the English middle class was on a holi-holiday from real-reality. In the US, these songs turned up on the reissue of The Clash (two of them as a bonus 7-inch single) and on the catch-all compilation, Black Market Clash.