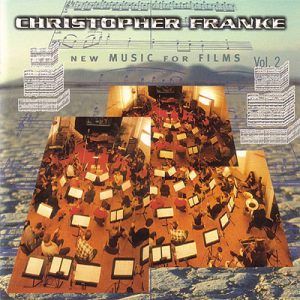 I wrote the AMG review for the first volume, so when I saw the second volume of New Music For Films I couldn’t resist buying it. This illustrates something that I think is very important in criticism: context. Comparing the first volume to the work of Tangerine Dream (and to a lesser extent, its titular namesake Brian Eno’s Music For Films) was the appropriate context for that review. The first volume represented some of Franke’s earlier post-TD soundtrack work, so listeners would approach the disc from that vantage point (i.e., in that context). My assessment in the AMG review? Save your money, TD fans, it’s fragmentary stuff. I wasn’t speaking to Christopher Franke fans because, really, in 1993 there weren’t Franke fans so much as TD fans who made the leap with him. Again, the idea here is context. So when I read the AMG review on the second volume of Films, I was disappointed because (among other things) the reviewer was still writing within the context of 1993. But the second volume was released in 2000, and today the appropriate context is as follows: not the long-removed soundtrack work of Tangerine Dream, but the substantial body of work (including soundtracks) that Franke has since recorded and its titular twin, the first volume of film music. In this context, the only relevant context for the audience (Franke fans), New Music For Films, Vol. 2 is by far the better disc by design. The first volume consisted of episodic, disjointed pieces. The second volume is made from a richer musical cloth and interwoven to provide genuine listening pleasure: “Morning Ride,” “Attack on the Village” and “Flight For Opar” are not only evocative as incidental music but they’re rewarding to hear as new music. It’s clear on the second volume that Franke and the Berlin Symphonic Film Orchestra have raised their “score” considerably. In other words: New Music For Films, Vol. 2 is better than Vol. 1. I would think critics should be held accountable to the three Cs: context, content, conclusion. But so many reviews I read are extemporaneous history lessons, excerpted paragraphs from a fluid biography floating through the writer’s mind at a point in time. That said, commercial venues can be confining to a critic, as I found in my own personal experience. One of these days, I’ll have to assemble my own treatise of musical criticism, since the form is strangled by the proliferation of opinions on the Internet.

The Pictures
Design by Doerte Lau and Andreas Adamec.