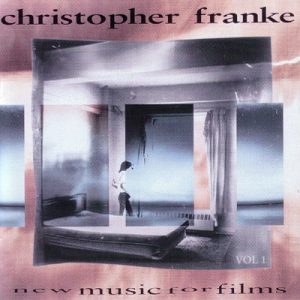 Eno and Tangerine Dream come to mind, but best to put them out of your mind for the time being. These are not short, ambient pieces (they are short) but snippets from soundtracks. Not the avant-garde electronic soundtracks that Tangerine Dream used to write, but a traditional blending of orchestra and synthesizer. Of all the ex-Dreamers, Franke’s solo career may be the least interesting. Since splitting Tangerine, he’s split his time between new age albums and film scores, neither rich avenues of music. And not even scores to good films, but to bustblockers like McBain and Universal Soldier. So here you are: music you wouldn’t remember from films you never saw (She Woke Up, Eye of the Storm). Volume one. While I’m all for the historical preservation of music, repackaging these twenty-four tidbits into a new release is unnecessary. Franke presumably got paid the first time for writing them, and you don’t need to pay fifteen dollars to hear them again. However, if you’re a Tangerine Dream fan, there’s bound to be a little tugging at your conscience for not buying a Christopher Franke disc, so let me tug a little harder on my end. He writes very professional film music. If you snatch up James Horner soundtracks convinced that they’re classical opi, then by all means whip that money out of your wallet for Franke. But if you came here to catch a glimpse of the tangerine titan spinning new worlds from his imagination, keep dreaming. His solo career is by far the most business-like of the band, which is (I hope) financially rewarding for him, but not if you need to kick fifteen bucks into the kitty every third soundtrack. Aqua, Romance ’76, Dune, World Without Rules. Don’t even think of Franke until you own these albums.

All music composed by Christopher Franke unless noted.

The Pictures
Graphic design by Doerte Lau and Darwin Foye.