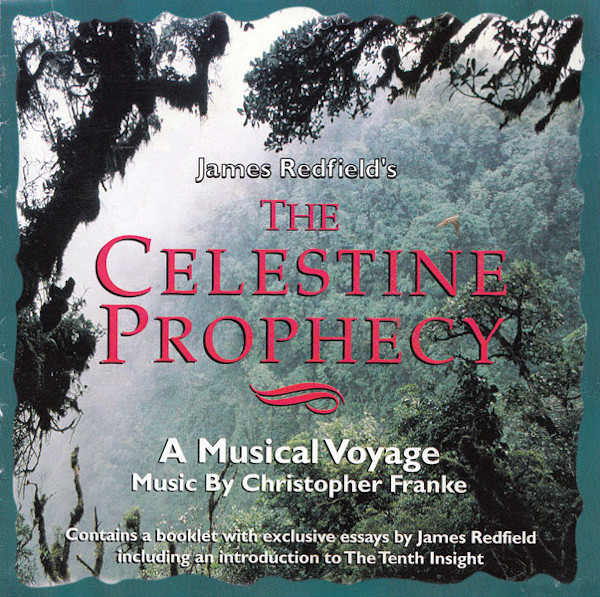 New age music from the former TD mainstay linked to the new age philosophy of The Celestine Prophecy book.

I’ve haven’t grown so soft around the middle that I don’t find the whole spiritual journey in South America theme just an itsy bitsy celestiney weenie-ish, but it wouldn’t be the first time that a second-rate libretto inspired a first-rate score. If you’ve read my other Christopher Franke reviews (and who hasn’t?), you’ll know that I don’t give him a free pass for past services rendered in the great dream. And, as a discographer, I can’t help but note that the man’s recorded oeuvre is littered with dubious entries, including no less than a dozen soundtracks to a series whose sole purpose seemed to be to make Deep Space Nine look like less of a complete crapfest, Babylon 5. (I still think both series should have ended after the first season with their ships colliding into each other.)

Steeled for sixty minutes of new age navelgazing, I was surprised to find that Franke had instead written a surprisingly melodic, evocative score that held its own with the natural and exotic works of Kitaro, Vangelis and Jon Anderson. Although the story is set in Peru, Franke has some united notions about what the music should sound like; there are peruvian flutes, chinese flutes, australian flutes, american indian flutes, japanese flutes, african voices, gregorian chant and irish harp all intertwined. It’s an unusual approach to program music, this multicultural mixing, but Franke apparently felt the need to peru’s other vistas in his search for the right musical settings.

To his credit, the songs match the program nearly perfectly, whether it’s the energy-filled gardens of Viciente or the right choices revealed in Scene at the Crossroads. Honestly, I had given up finding anything of merit in Franke’s solo catalog, and I obviously gave up too soon. The Celestine Prophecy is meritorious music that reveals a melodic side to Franke’s muse and deserves the accolade as one of the year’s best new age albums.

1. The Celestine Theme
2. Guided Dream To The Manuscript
3. Viciente
4. A Radiant Band of Light
5. Jensen – The Energy Thief
6. Mystical Experience On The Mountain
7. The Mission of Father Sanchez
8. Illumination
9. Scene At The Crossroads
10. The Quest For Unity
11. Confrontation
12. The Mystery of the Ruins – Wil’s Transfiguration