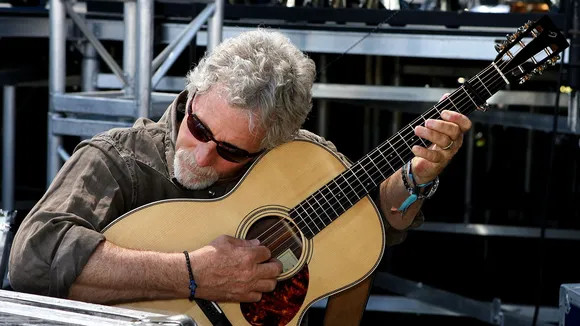 Chris Hillman is a seminal figure in country-rock. Prior to joining The Byrds as their bass player, Hillman was the featured mandolin player in a bluegrass band called The Hillmen. He was mostly a supporting player for The Byrds’ first few albums, but that changed with Younger Than Yesterday. On that album, Hillman emerged as a songwriter and introduced a distinct country-rock flavor to the band on songs like “The Girl With No Name” and “Time Between.” After the overtly country-rock Sweetheart of the Rodeo, Hillman and Gram Parsons left The Byrds to form The Flying Burrito Brothers.

The Gilded Palace of Sin, like Sweetheart before it, is an acknowledged country-rock classic (although both have psychedelic overtones). Unfortunately, Parsons’ erratic behavior got him fired from the band, and Hillman dissolved the group a few years later, opting to join Stephen Stills’ new group, Manassas. Manassas was primarily a vehicle for Stills, however, with Hillman more or less playing a supporting role as a second guitarist and occasional songwriter. After Manassas ended, Hillman reunited with his original bandmates for a one-off album titled simply Byrds.

The success of country-rock bands like Eagles and CS&N seems to have been the inspiration behind Hillman’s next move, a collabration between Richie Furay (Buffalo Springfield, Poco) and sometime Eagles songwriter J.D. Souther as The Souther-Hillman-Furay Band. After two albums, SHF parted ways, and Hillman put his attention on a solo career.

Produced by the Albert Brothers (Manassas), Slippin’ Away was a solid collection of country-rock songs in the same vein as Eagles that featured members of The Flying Burrito Brothers and Manassas. A second album, Clear Sailin’, found Hillman working more with journalist Peter Knobler as a songwriting partner, with similar results. Neither record charted particularly well, though, paving the way to a reunion with Roger McGuinn and Gene Clark. McGuinn, Clark & Hillman gave him a hit single with “Long Long Time,” but no hits were forthcoming on the disappointing second album, City.

Over the years, Hillman has continued to release country-rock albums both under his own name and as a member of The Desert Rose Band. More recently, Hillman can be heard with mandolin in hand playing bluegrass music with his old friend, Herb Pedersen, proving that all Byrds return to their nest sooner or later. In 2017, Hillman released Bidin’ My Time, which was produced by Tom Petty.

AT EDWARDS BARNS (2010)
Live tracks: Going Up Home / Love Reunited / Turn, Turn, Turn (To Everything There is A Season) / If I Could Only Win Your Love / Tu Cancion/ Our Savior’s Hands / Wheels / Have You Seen Her Face / Eight Miles High / Together Again / Desert Rose / Sin City / The Cowboy Way / Wait A Minute / Heaven’s Lullaby. Credited to Chris Hillman & Herb Pedersen, recorded live in 2009 and released on compact disc in 2010 in the US (Rounder).

SIX DAYS ON THE ROAD (2015)
Live tracks: Intro / Safe At Home / Down In The Churchyard / Time Between / High Fashion Queen / Colorado / Fallen Eagle / Christine’s Tune / Follow Me Through / Blue Morning / Six Days On The Road / Move Me Real Slow / So You Want To Be A Rock ‘n’ Roll Star. Credited to Chris Hillman & Friends, recorded live in 1975 and released on compact disc in 2015 (All Access).

BIDIN’ MY TIME (2017)
Bells of Rhymney / Bidin’ My Time / Given All I Can See / Different Rivers / Here She Comes Again / Walk Right Back / Such Is The World That We Live In / When I Get A Little Money / She Don’t Care About Time / New Old John Robertson / Restless / Wildflowers. Released on compact disc in 2017 in the US (Rounder).

THE ASYLUM YEARS (2018)
Step On Out / Slippin’ Away / Falling Again / Take It On The Run / Blue Morning / Witching Hour / Down In The Churchyard / Love Is The Sweetest Amnesty / Midnight Again / (Take Me In Your) Lifeboat / Nothing Gets Through / Fallen Favorite / Quits / Hot Dusty Roads / Heartbreaker / Playing The Fool / Lucky In Love / Rollin’ And Tumblin’ / Ain’t That Peculiar / Clear Sailin’. Released on compact disc in 2018 in the US (Omnivore).