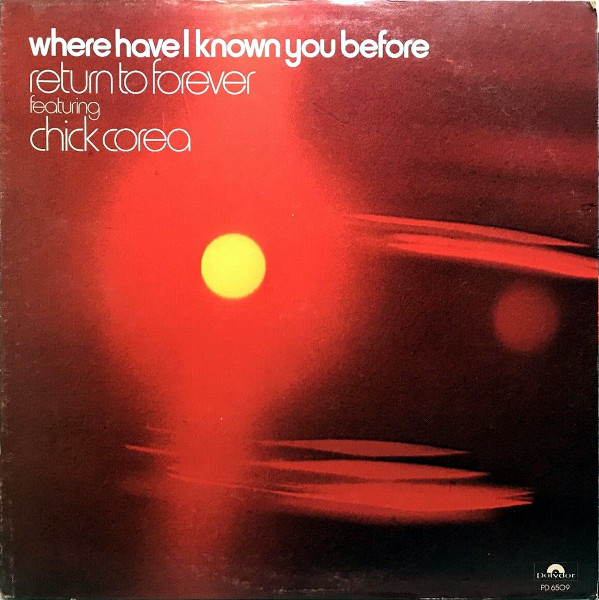 There are some days–let’s call them sumdays for the sake of a lovely argument—when the whole English language is a slippery squid. Words dart, half-glimpsed, in the murky ruins of an Atlantean ampitheatre, furtive ghosts that serve roe-eyed monsters, and I move as in the amniosis* of a dream. (*Not a word, see?) Jazz does this to me.

For a gooey handful of sumdays now, I’ve built and torn down monuments to Where Have I Known You Before, all in an effort to capture something that is the very essence of elusion*. The group’s earlier effort, Hymn To The Seventh Galaxy, marked the maiden voyage of the U.S.S. Artieff into space jazz/rock fusion. That album, clever as it was, could be contained in dry prose without suffering too deeply the infirmities of air. WHIKYB is more exotic, almost extraterrestrial, and quickly shrivels up when hauled onto the dry deck of my imagination for examination. At best, I can tell you what I’ve seen in those glimpses: Al DiMeola, the fleet-fingered recruit from the starmaker academy, careening around the opening corner of “Vulcan Worlds” with guns blazing; the surface eruptions of a red sun silhouette against a Lo moon of cool indigo; the alien chatter of sentient matter communicated in popping, bubbling, boiling bass notes; and Captain Chick split into two persons, two worlds, two times and still holding it together.

This album is its own monument to a meeting of galactic consequence. The future adventures of the Artieff’s crew would be more amazing still as Al DiMeola, like a certain newt, got better, but even here the young guitarist’s greenness is one more color in a technicolor trip beyond the seventh galaxy.

1 thought on “[Review] Return To Forever Featuring Chick Corea: Where Have I Known You Before (1974)”