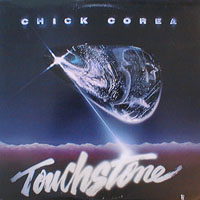 An album that captures all of Salvador Dali’s humidity and little of its fantastic surrealism. The comparison is invited through a short story from Tony Cohen that appears on the inner sleeve. Whether this is program music based on the story (or vice versa) is anybody’s guess. You could probably lump Touchstone in with Corea’s “spanish” works, as many of these songs would have felt at home on My Spanish Heart. The presence of guitarist Paco De Lucia on “Touchstone” and “The Yellow Nimbus” is dominant, lending a romantic edge to this remote and troubled music. Lee Konitz takes the lead on the sad, apprehensive “Duende” (similar to Corea’s Lyric Suite for Sextet), Steve Kujala for the cagey “Dance of Chance.” Like a number of Chick’s group efforts, he either pairs his instrument with other players for joint solos or slips from the spotlight altogether. The results are initially interesting but ultimately underwhelming, save for the RTF reunion on “Compadres” where Al Di Meola spices things up for the record’s most refreshing track. But refreshment is hard to find in the world of Touchstone; more often than not I find this album draining and even listless at times. This is music you need to be in the mood for, say on a cold winter’s night when hot and humid are desirable. Otherwise this is simply another of Chick Corea’s also-rans, like Secret Agent or Again And Again. There was a time when the opening “Touchstone” held my attention, its funereal pacing nearly mesmerizing, but that was the halo effect of newness at work. Looking for more and finding little, I’ve since grown disenchanted with Touchstone. Perhaps I’ve dug too deeply or not deep enough in search of a fruitful fusion.

All music composed and arranged by Chick Corea.