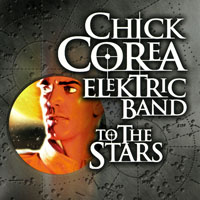 “One of these days Alice,” said the Red Queen, “straight to the stars.” A reunion of the Chick Corea Elektric Band in its stellar quintet form becomes the launching point for this concept album based on the L. Ron Hubbard book, To The Stars. Space is apparently a swinging place filled with rumba and calypso music, at least some of the time, which is to say that Corea and company don’t really try to reinvent themselves for this outing; an album based on Watership Down probably wouldn’t have sounded much different. Corea goes ahead and aligns the music with sections of the story anyway (remember The Mad Hatter?), and breaks up the compositions with short space interludes that have nearly the same effect as Steve Miller’s segues between songs in the Seventies, suggesting that Corea might have the makings of an excellent space ambient album up his sleeve some day. The opening “Check Blast” is a cool collision of rock and spiky jazz, but it’s the noisy anomaly on an album just as likely to settle into five minutes of cosmopolitan jazz (“Mistress Luck-A Portrait”) or Weather Report-styled island fusion (“Johnny’s Landing,” “Hound of Heaven”). The quintet has only grown finer with age, and it’s a pleasure to hear them engaged in a vital new work rather than breeze through oldies or half-baked originals. Corea has explored many of these ideas before on past albums, with the spacey interludes being the new wrinkle in time. In my mind, fusion always looks better wrapped in the context of fantasy (Romantic Warrior, Where Have I Known You Before). The character of Captain Jocelyn, the piano-playing and enigmatic anachronism who leads his crew into space, must have resonated with Chick Corea, who closes this disc with pages torn from the original plot. Otherwise, as I said, it’s a somewhat loose interpretation of events, familiar electric fusion (plus the acoustic “Alan Corday”) with the usual Latin elements, smartly arranged and executed by a veteran crew. The thematic framework gives the music an added dimension, and it’s enough to propel this disc into my shortlist of favorite fusion destinations for the moment.