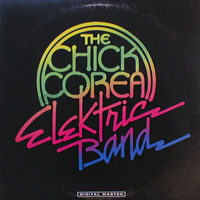 Kronomyth 43.0: ELECTRIOCITY. A new chapter for Chick, who takes two supremely talented youngsters under his wing and leads them flying through some spirited fusion music. This, their debut album (and first for label GRP), could be seen as a return to RTF’s old stomping grounds except that here Corea is the master, Patitucci and Weckl the students. The record follows a loose concept concerning life in Elektric City (an analogy for our own world), like most cities harboring both temptation and salvation. The playing is superlative as you’d expect; Corea remains expressive and entertaining even behind an array of electronic machines, while Patitucci and the unconventional Weckl show flashes of real fire. The trio also receives some help from guest guitarists Carlos Rios and Scott Henderson. If you’re wondering why the album rates an average orange (oh, he’s color coding them now), it’s because so few fusion albums really get under my skin. I’ve listened to this record at least two dozen times, and by now I look for the same payoffs: the lively “Got A Match?” with its shades of Birdland, and the two exotic bookends on side two, “No Zone” and “India Town.” The rest of the record is good, but it doesn’t affect me the way a Romantic Warrior does. To its credit, The Chick Corea Elektric Band benefits from a consistent musical vision. Corea albums from the late ‘70s could often hop around restlessly between classical, traditional and fusion jazz, but this is pure electric/electronic fusion from beginning to end. If you enjoy fusion for itself (or think everything by Weather Report is brilliant) than you should check out at least one Elektric outing (preferably one featuring Eric Marienthal). This is otherwise an auspicious start, suggesting that as Weckl and Patitucci develop they might themselves complete the cycle from students to masters.

Tracks 1-8 composed and arranged by Chick Corea unless noted.