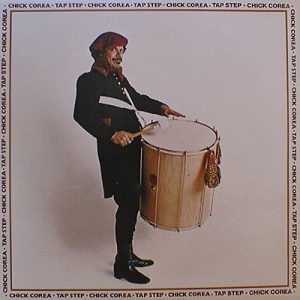 A nudge better than the recordings around it (Secret Agent, Touchstone) despite the silly costume. Drawing from a loose axis of familiar players, Corea presents seven new compositions that touch upon lighthearted funk, Latin music, cool jazz, and traces of fusion. In other words, Chick is still marching to the same pattern set forth on earlier albums, though the material this time is very good. Tap Step features no missteps, despite trying its hand at all manner of music. The opening “Samba L.A.” is unexpected, a gossamer samba both winsome and ethereal that serves as a cautious celebration (perhaps due to the lack of a low end that a bass player would have provided). “Embrace” is a lilting, pungent song featuring the vocals of Gayle Moran and a wonderfully sneaky arrangement from Chick. The march eventually arrives in “Tap Step,” given a distinctly jazzy flavor here. Side two begins with the delightful “Magic Carpet,” a piece that appeases both the sophisticated palette and the animal grace of jazz simultaneously. Squeaking and squawking herald “The Slide,” which Corea and Jamie Faunt (on piccolo bass) gingerly take up before immersing themselves in a remarkably rich rhythm. The playful “Grandpa Blues” features Chick on vocorder and Stanley Clarke contributing lead guitar-like lines from his piccolo bass (they must have rented one for the week). Tap Step ends on a serious note with the restless “Flamenco,” a noisy return to a style Corea has probably exhausted at this point. Add these seven tracks up and the sum total is surprisingly solid; not the sort of album to displace My Spanish Heart, but the kind of tasty fare that Corea fans can rally behind.