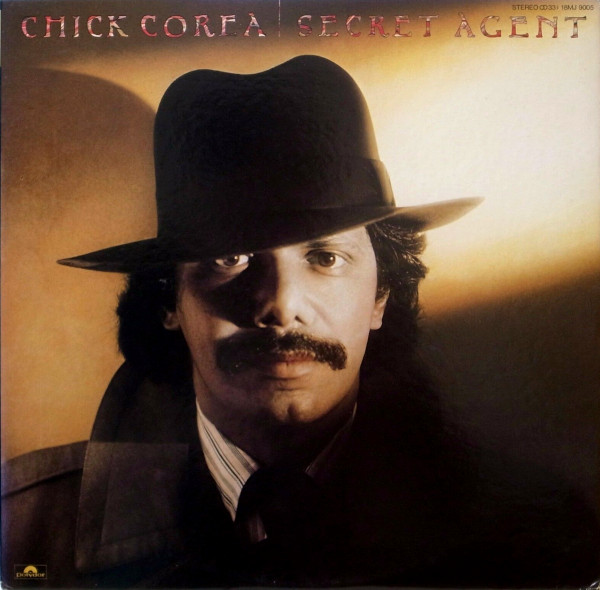 Another of Chick’s costume changes, featuring new and old friends for a mix of vocal and instrumental fusion, funk and jazz.

After Chick Corea put Return to Forever to bed, he returned to making solo albums. Lots of them. In 1978 alone, he released three new studio albums and two lives ones. Secret Agent was the last of these, slipping in before Christmas on the off chance that fans could fit one more Chick Corea album in their stocking. Recorded with a new lineup that featured Bunny Brunel (bass), Tom Brechtlein (drums) and a full horn section, the album included a mix of material that included funk, synthesizer jazz and a few vocal excursions with wife Gayle Moran.

Chick has released some brilliant albums in his lifetime. Lots of them, actually. This is not one of them. To begin with, the band is a bit unwieldy: horns, strings, vocals and percussion end up toppling the arrangements half the time (e.g., Central Park, Glebe St. Blues). Corea is a masterful arranger, but nobody can keep that many pieces in the air. Secondly, Gayle Moran’s voice is something of an acquired taste; she’s no Yoko Ono, but she’s not Flora Purim either. It takes a really strong vocalist to stand out in a full jazz setting (cf. Al Jarreau on Hot News Blues), and Moran is more of an airy accompanist.

Secret Agent is otherwise notable for its pronounced shift toward synthesizers. Corea had got his hands on an early version of the Oberheim Eight Voice synthesizer (first appearing on The Mad Hatter) and, together with his small army of Moogs, tilted the scales in favor of electronic sounds on Secret Agent. The music has aged much better than most synthesizer work from the 70s, almost approaching the moody jazz sounds of Vangelis in a few spots (notably on the wonderful arrangement of Béla Bartók’s Bagatelle #4). The opening Golden Dawn is another successful marriage of synthesizers and jazz.

The synthesizer’s seduction of jazz artists is not synonymous with their best work (cf. Herbie Hancock, Jean-Luc Ponty), and few would argue that the late 70s and early 80s were the golden age of jazz. Funk and its ugly sister, disco, had begun to creep into jazz, smoothing over some of its rough edges in the process. Fickle Funk, for example, is a little too smooth for my tastes. Personally, I preferred The Mad Hatter, in part because I like program music. There are few mind-candy moments on Secret Agent. The opening two instrumentals are solid, the closing Central Park is a swell way to end things, and the Bartók piece is an oasis of cool. The rest of the album is more ho-hum than tweedle-dum, and few are likely to get jazzed about Corea’s third-best album from 1978.