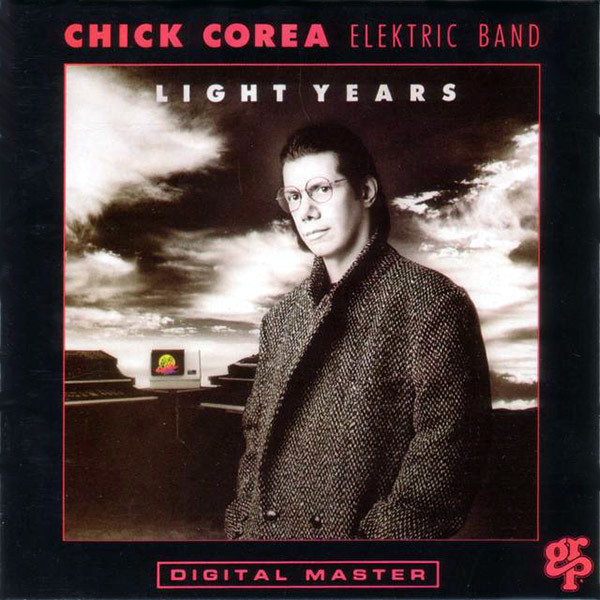 Marienthal and Gambale join Elektric’s company, but the whole thing short-circuits under too much technology.

You know, I wanted to like this album if only to stick it to the snobs at Penguin, but, no, this is light years removed from Chick’s best work—from the last Elektric Band album, even (which was also the first Elektric Band album). The decision to add saxophonist Eric Marienthal to the group pushes the music decidedly into the smooth fusion camp; think Yellowjackets, and then think of something else quick so you don’t have “And You Know That” stuck in your head all day.

The Elektric Band was a concession to the changing tastes of the time and the world’s newfound fascination with digital technology. Jean-Luc Ponty went down this rabbit hole a while ago, which is not coincidentally when I ceased to be curious about his comings and goings. Corea is capable of pulling off the digital switcheroo, as his last album showed. Light Years, however, is an unnatural transplant. Instead of timeless themes, there are tepid riffs; digital drums and electronic sounds come crashing together, and the whole thing feels like one of those noisy Frank Zappa electronic jazz albums (cf. Jazz From Hell) with the ghost of Corea’s warm Latin fantasies trapped somewhere inside.

For your troubles, you will find a handful of songs that stand with the band’s last album, two of which (“Smokescreen,” Kaleidoscope”) only appear on the expanded CD version. Those last three tracks also do not feature Marienthal. Coincidence? Eh, probably not. That’s not to suggest that Marienthal isn’t good; it’s more a reflection of my strong distaste for smooth saxophone fusion. For some reason, I liked him a lot more on Beneath The Mask and Paint The World, so maybe the quintet needed more time to gel. As for the new guitarist, Frank Gambale, he’s fine when you can hear him, but he doesn’t fare any better in the mix than Ponty’s axeman most of the time. (Guitarist Carlos Rios, a holdover from the last Elektric Band, appears on two tracks with more or less the same results.)

In complete transparency, GRP is not my cup of tea. I don’t like smooth fusion and the whole digital jazz thing during the 80s was a big turnoff to me. Herbie Hancock’s electronic experiments were at least true to jazz’s evolutionary/revolutionary stance. Corea, on the other hand, appeared to be re-aligning to match the tastes of the time and grab one more Grammy. The Elektric Band got better over time, fortunately, and I turned my ire toward the Akoustic Band instead. If you’re interested in Chick’s Elektric adventures (an interest I would cultivate only after exhausting Forever), better to start with their next few albums, since Light Years feels like a warmup to what followed.

All songs written and arranged by Chick Corea unless noted.