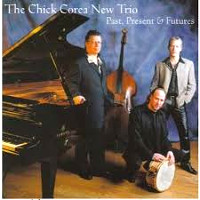 Kronomyth 63.0: FULL CIRCLE. As writing to one in the world for whom it matters, the new Trio is Origin shorn of horns, mourning the lost past in the pink dawn of a new millennium, the view of our visionary starcaptain still clear at sixty, fingers dancing dexterously over the controls while those young turks of time travel, Avishai Cohen and Jeff Ballard, provide the supple and smart support needed to make the new trio’s maiden voyage a success, and yes the lost shepherdess Anna may be the ghost in the time machine, but Chick is truly a man who transcends time while embracing (rather than defying) it, gliding through new vistas where progexotica may yet be glimpsed (e.g., ending the title track with a sheer cliff of stunning triads), breathing life into history (“Jitterbug Waltz”), stirring a world of sounds into a tasty stew (“Rhumba Flamenco,” “Anna’s Tango”), as Cohen coaxes and cajoles black drops of elastic notes from his acoustic bass and Ballard bounces rods of endless energy off of skins, rims and metal spheres in perfect time to advance the Captain’s march, and it dawns on you at the cusp of this new age that the traditional trio format has never failed Corea, though some of the solo records have been deadly dull. With a sounding board of young stars at his side (in a career that has created a cluster of them), few surf the sea of space and time like Chick, a luminary from the past, lodestar of the present, magnetar of tomorrow.

All songs composed by Chick Corea unless noted.